Review of The Art of War 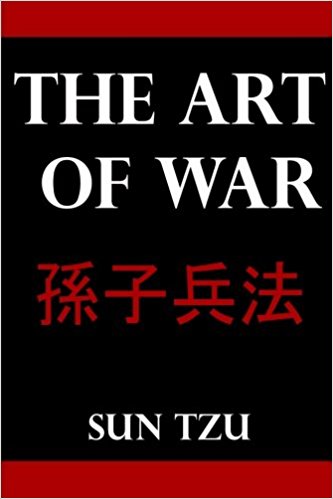 Title: The Art of War

The above rating is based on this version of The Art of War & not the original text.

Written in 500 BC during China’s Spring and Autumn period by the legendary general, military strategist and Taoist philosopher, Sun Tzu, The Art of War – known in Chinese as Ping-Fa– is widely regarded to be one of the most influential military treatise of all time.

Since the book was conceived over 2500 years ago, Sun Tzu’s shrewd principles of psychological warfare and military tactics have influenced many great military leaders and world conflicts over the course of history – from Chinese leader Mao Zedong to Napoleon Bonaparte. Ho Chi Minh is also thought to have employed many of Sun Tzu’s guerrilla tactics to achieve victory over the United States during the Vietnam War. Outside of the military, The Art of War has become essential reading for politicians, business strategists and sports people across the modern world.

The book is divided into thirteen chapters (pian), covering topics such as terrain, weather, leadership, logistics, resources, spies and morale – which read rather like a list of commandments – suggesting that the book was possibly intended as a reference manual for generals and army commanders to use in the field. But what makes The Art of War superior to other military texts of its time, lies in Sun Tzu’s unorthodox philosophy of battle strategy.

Rather than engaging the enemy in direct combat, he employed a combination of direct and indirect tactics that relied on speed, surprise, deception, espionage, or by dividing/misleading troops and attacking their points of weakness in order to gain maximum advantage on the battlefield.

In battle there are not more than two methods of attack – the direct and the indirect; yet these two in combination give rise to an endless series of manoeuvres.

By understanding, outwitting and demoralising the enemy, Sun Tzu believed victory could be achieved with minimal combat, regardless of an army’s numerical strength.

If you know the enemy and know yourself, you need not fear the result of a hundred battles.

In ancient China, a long drawn-out war would ultimately leave a country weakened and at risk of an opportune attack from its neighbouring states. Sun Tzu said: ‘There is no instance of a country having benefited from prolonged warfare.’

The idea of winning a war whole, with minimal cost to life and resources is reflected in the Sun Tzu’s belief in Tao de Ching or The Way of life.

‘Indirect tactics, efficiently applied, are inexhaustible as Heaven and Earth, unending as the flow of rivers and streams, like the sun and moon, they end but to begin anew; like the four seasons, they pass away to return once more.’

Sun Tzu believed that by adopting a balanced approach, (the middle way) knowing when and when not to fight, when to conserve energy (qi) and when to use it to sustain momentum in battle, continually adapting to the situation at hand and outthinking the enemy, conflict could be resolved swiftly or even avoided all together.

‘Let your plans be dark and as impenetrable as night, and when you move, fall like a thunderbolt.’

To sum up, The Art of War is a fascinating read, filled with pearls of wisdom I’ll definitely be applying to my own fictional battles to come. The version I bought, however, is a thin, poorly edited copy of the Lionel Giles translation, except with a different cover, and provides no historical background or helpful footnotes to expand upon the brief text (62 pages to be exact). Hence the reason for my low rating, otherwise it would be a 5* review.

Don’t be fooled by this book’s bestseller rank on Amazon, as I was. Had I looked more carefully at the alternatives, I would have spent a few quid more on either the John Milford or Ralph Sawyer version, both of which appear to offer a more accurate and in-depth translation of Sun Tzu’s original text.

For further recommendations on top-rated The Art of War books, take a look at  https://www.sonshi.com/best-art-of-war-books.

There is also an excellent BBC Radio 4 In our Time podcast if you’d like to learn more about Sun Tzu’s fascinating history. Definitely worth a listen, especially the gruesome tale of the palace concubines. 😮