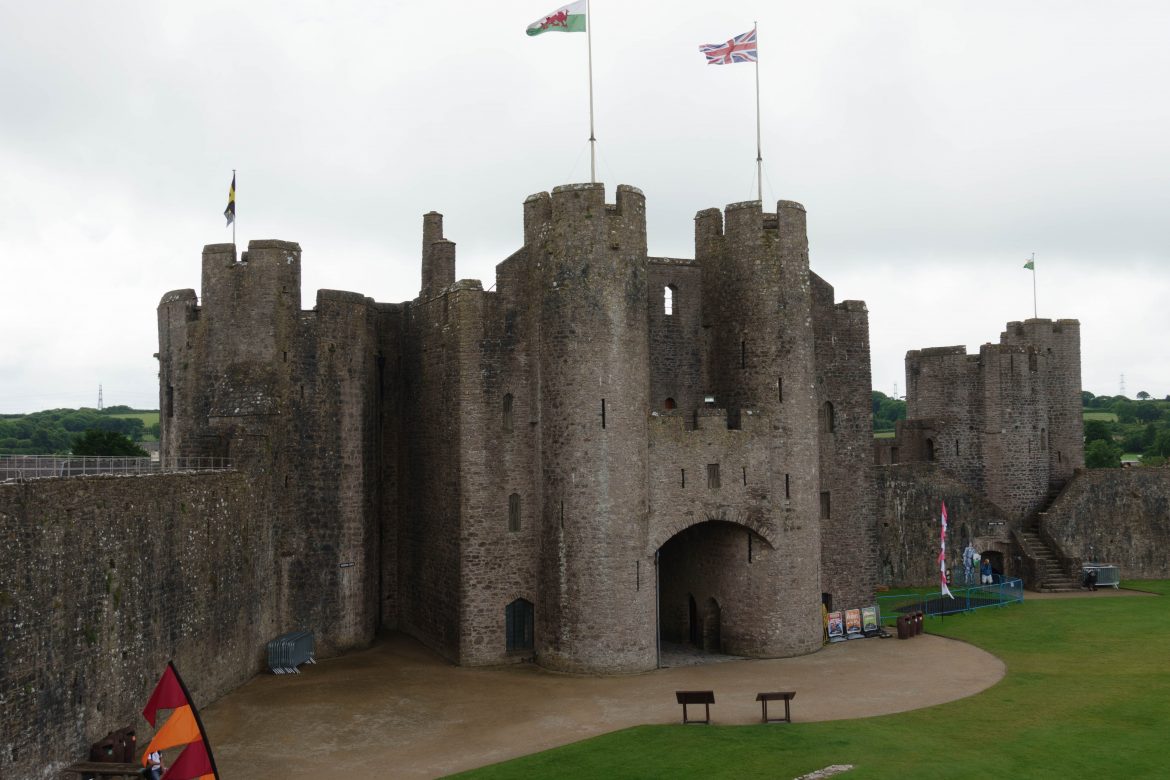 If you missed part one of our Tales from Wales, you can read it here:

You can’t write fantasy without developing a few unusual obsessions. A favourite of mine, aside from swords, magic and a strange fascination with dark underground caverns, is of course castles!

When I discovered there are an astounding 600 castles to visit in Wales – around twenty of which can be found in the county of Pembrokeshire alone – I was, to say the least, a tad excited. 😛 Until that is, the family put a great big dampener on my cunning plan by telling me they would disown me if I dragged them around nothing but castles the whole holiday. I could choose a maximum of two or walk home.

Research never far from my mind, Pembroke had to be my first choice. Not only is it one of the largest and most visited castles in Wales, it’s also one of Britain’s finest examples of a motte-and-bailey fortification. Perched on a rocky limestone headland between two tidal inlets of the Pembroke river, it’s impossible not to be blown away by the castle’s commanding and strategic presence over the town below.

Pembroke was founded in the 11th century, twenty seven years after the Battle of Hastings, by Roger de Montgomery the first Earl of Shrewsbury and confidante to William the Conquerer. Like many castles of the period, it was constructed with earthen ramparts and enclosed by a protective timber palisade and deep ditch.

A hundred years later, the castle came into the possession of famed knight Sir William Marshal after he received (through marriage to Isabel de Clare) the title of 1st Earl of Pembrokeshire in 1189, and who fortified the castle with stone.

From the above model you can see the castle was originally much smaller than it is today. The D-shaped gateway and walls of the Inner Ward were actually the castle’s outer defences, surrounded by a deep ditch. The Outer Gatehouse, curtain wall and round flanking towers were added during the latter part of the 13th century by William de Valence, who inherited the castle through marriage to William Marshal’s granddaughter, Joan.

Tickets purchased – at the reasonable price of £6 per adult & £5 for children over 3 (without gift aid) – the first sight to meet my eager eyes once we passed beneath what would have been the Barbican, was the mighty three-storey Gatehouse.

In days of old, intruders would have been confronted with two pairs of solid oak doors, two portcullises, numerous arrow loops and murder holes, through which rocks, scalding water or tar could be dropped on their unsuspecting heads. Luckily for us, we were greeted to a short introductory video on the history of the castle instead.

A guided tour is also on offer, but we chose to explore at our own pace with the help of the guide book for reference. Our first stop took us inside the twin-towered Gatehouse, which contains a wealth of fascinating exhibits, storyboards and models portraying what life would have been like for the people who lived here, including a lifelike medieval banquet of William de Valence feasting with his constable and family members.

Venturing up a tight spiral staircase to the second floor, we came to the rooms once used by the constable and his guards, and which have retained many of their original features, including a fireplace, window seat and garderobe (privy).

A narrow passageway then took us to the adjoining Henry VII Tower, where we found another tableau depicting fourteen-year-old Lady Margaret Beaufort and her nursemaid tending to her newborn son and future King Henry VII who was born at Pembroke. 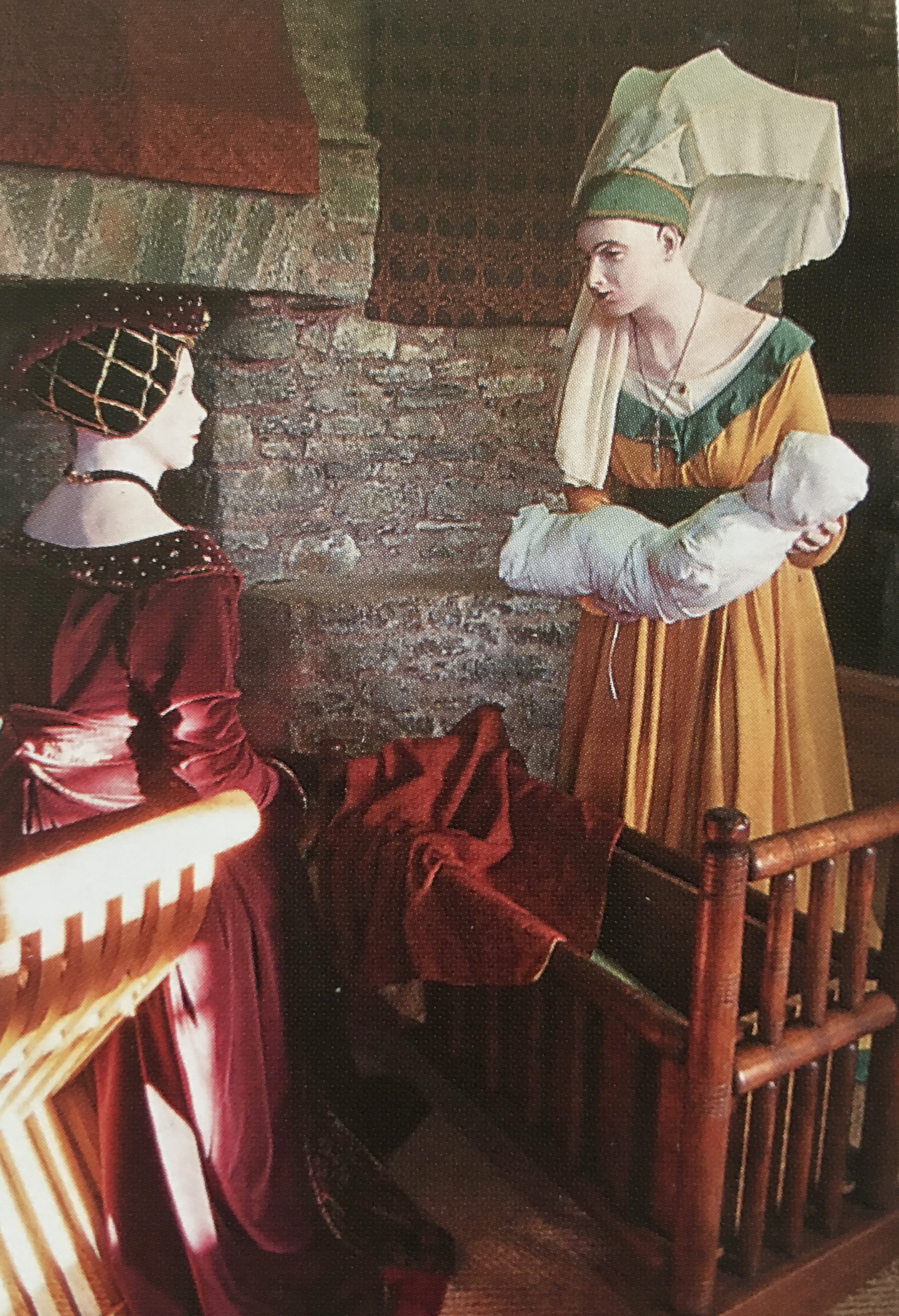 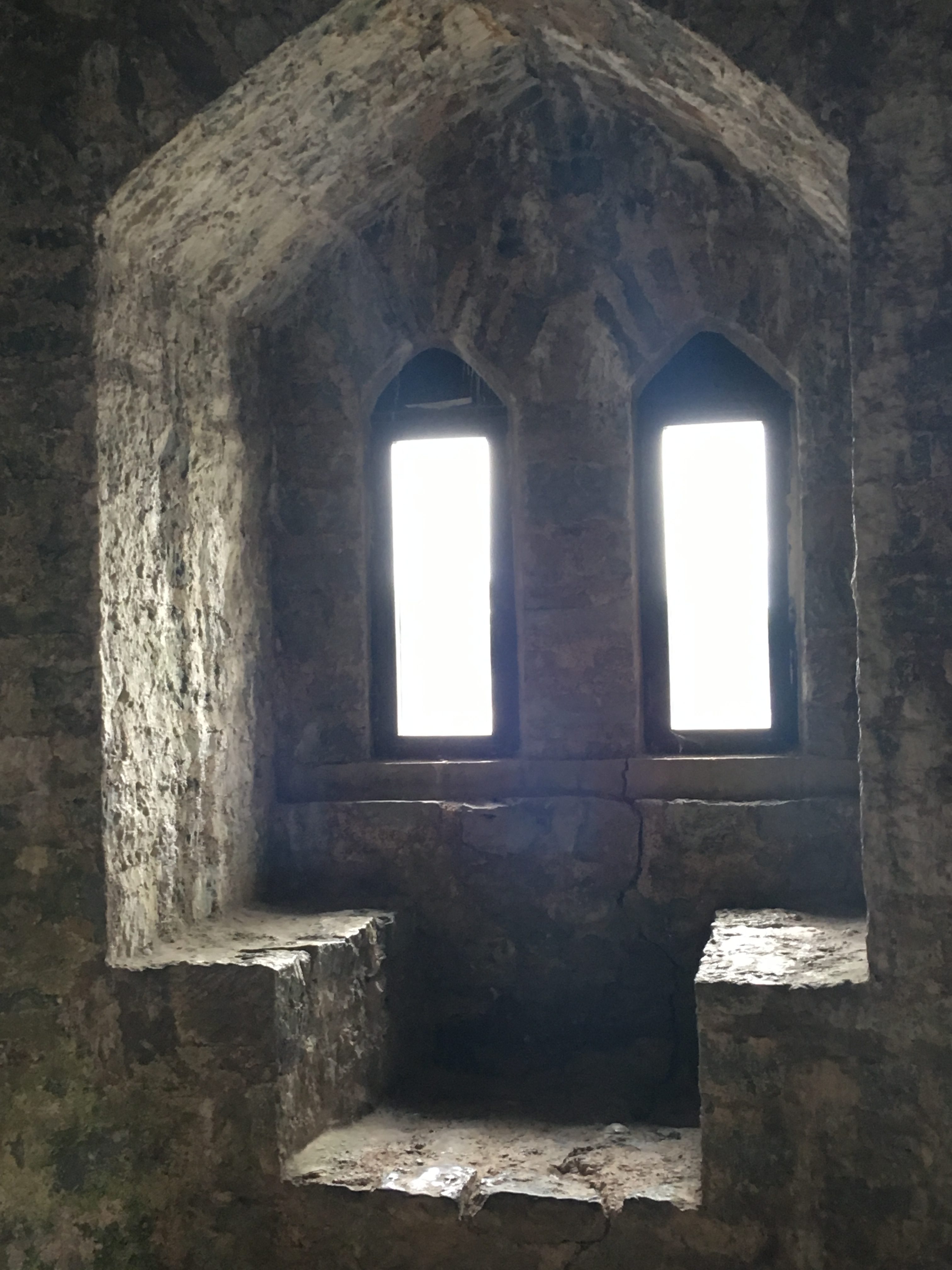 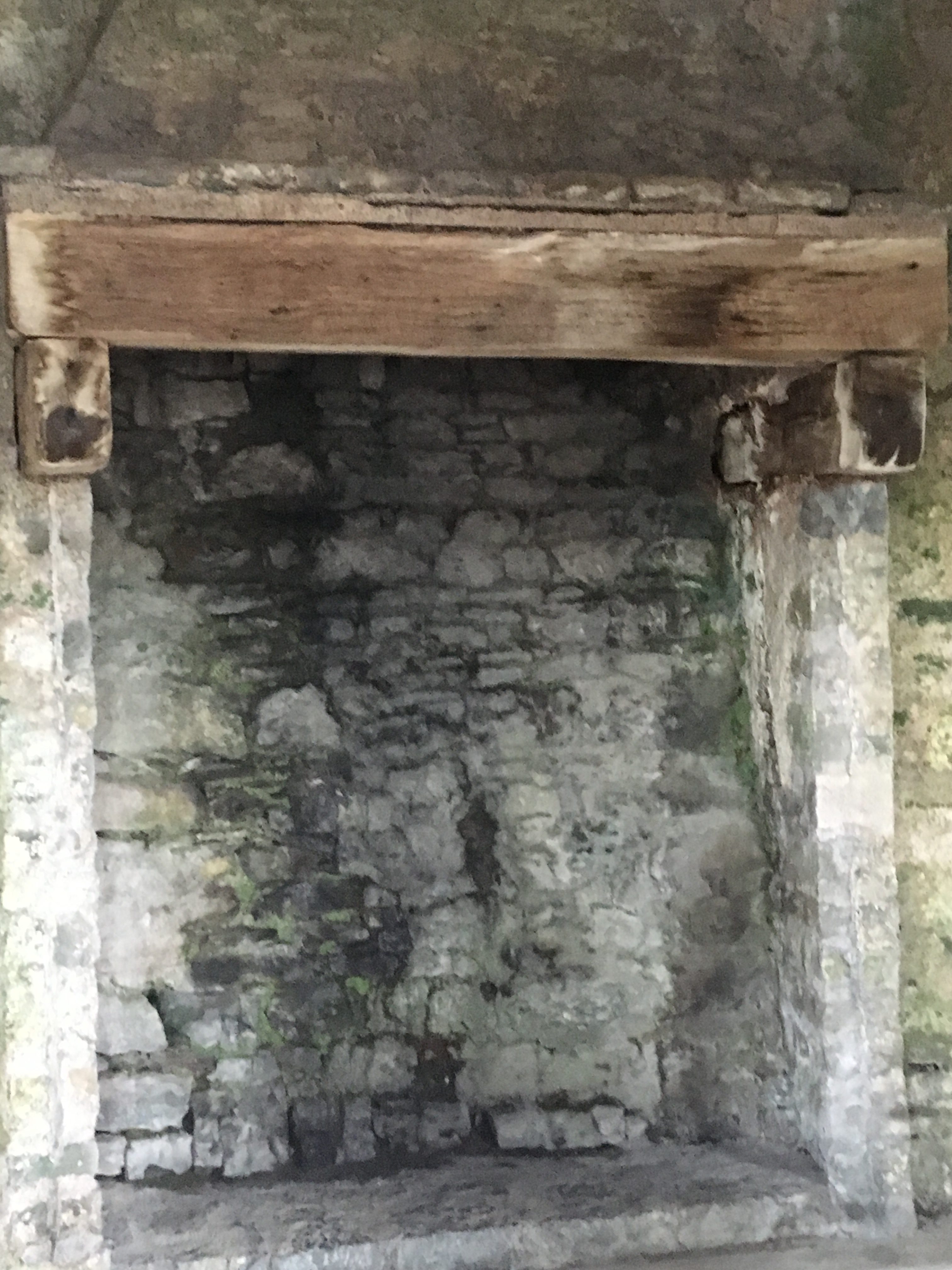 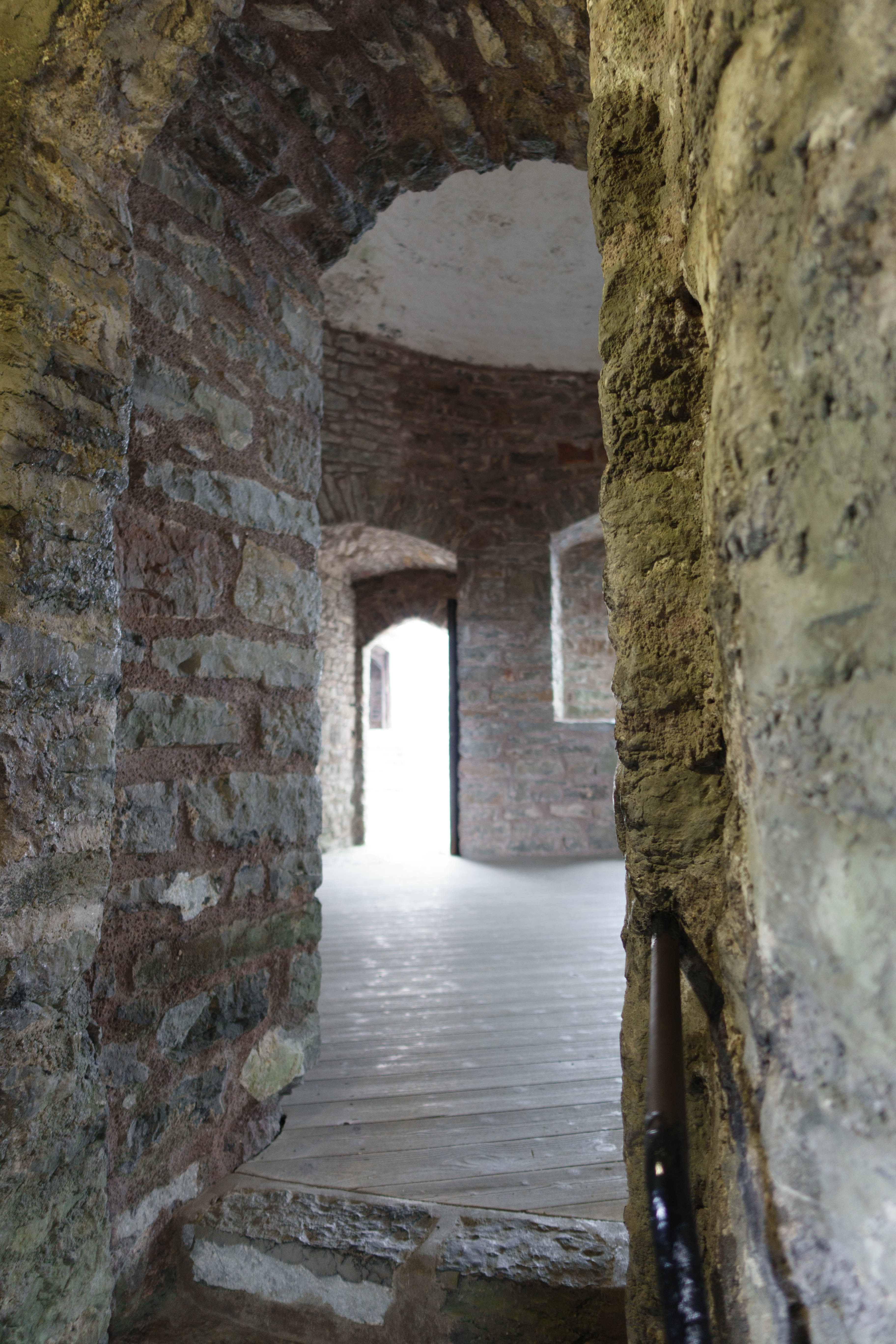 From here, we walked the parapet wall that runs between each of the Outer Ward Towers, which provided the perfect viewing platform to peer through all the arrow slits, spy holes and crenels along the way, as well as a fair amount of clambering up and down hundreds of tight and twisty stairs to take in the full spectacle of the castle and the surrounding views from the top of the towers, including the Great Map. 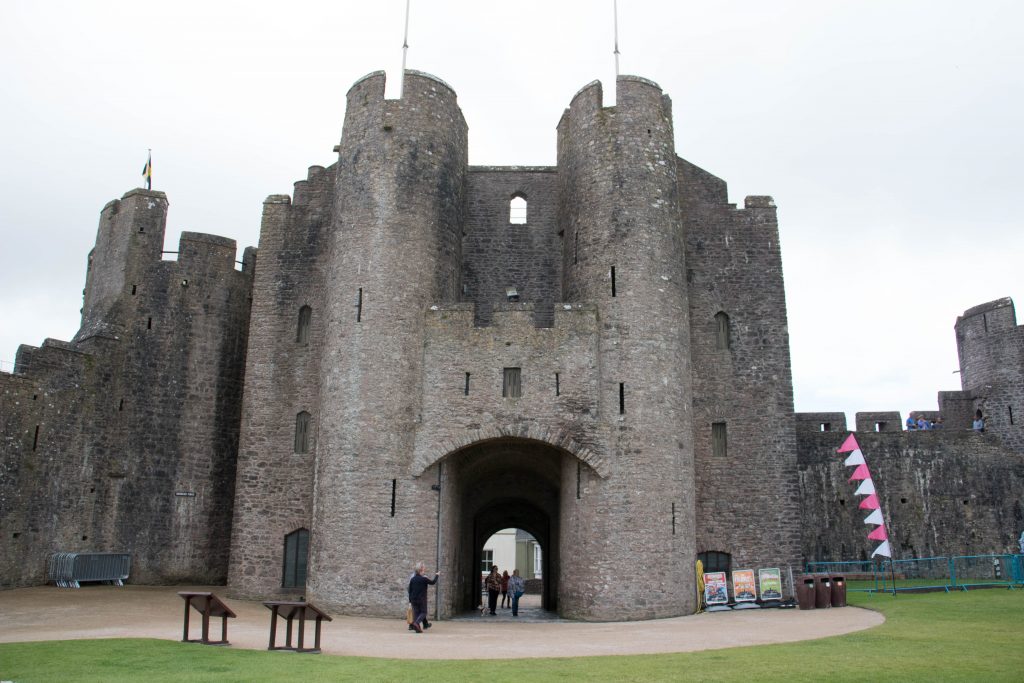 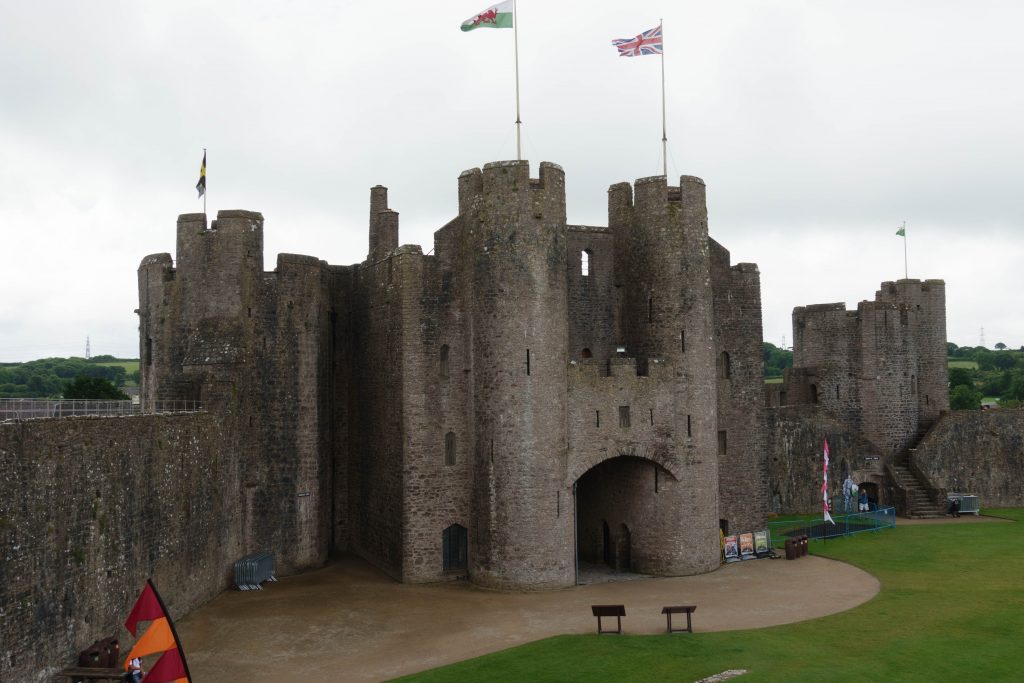 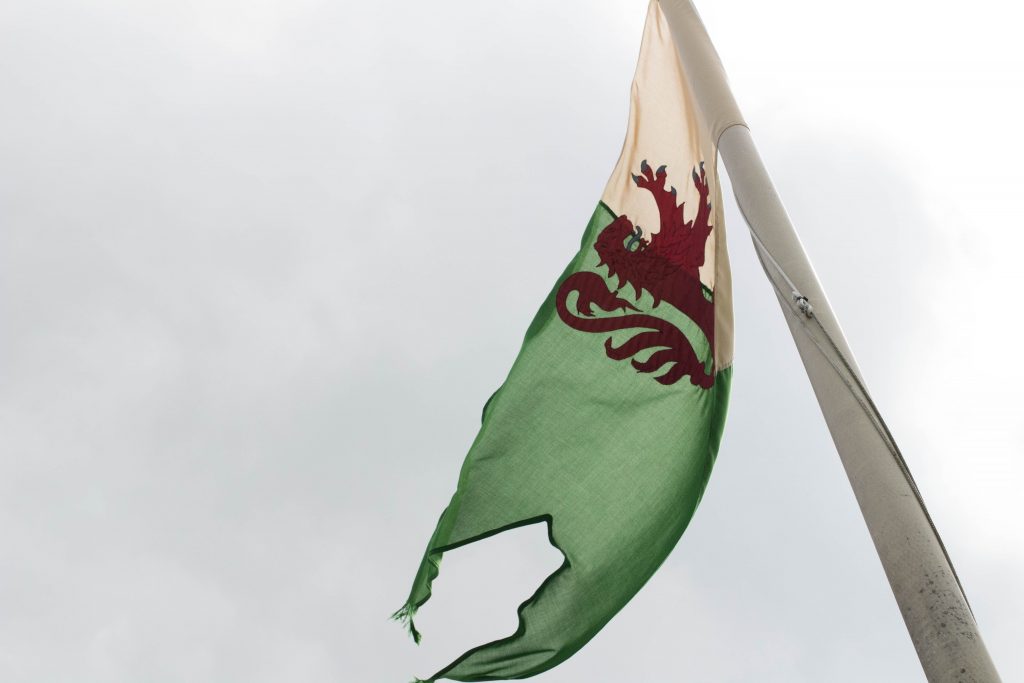 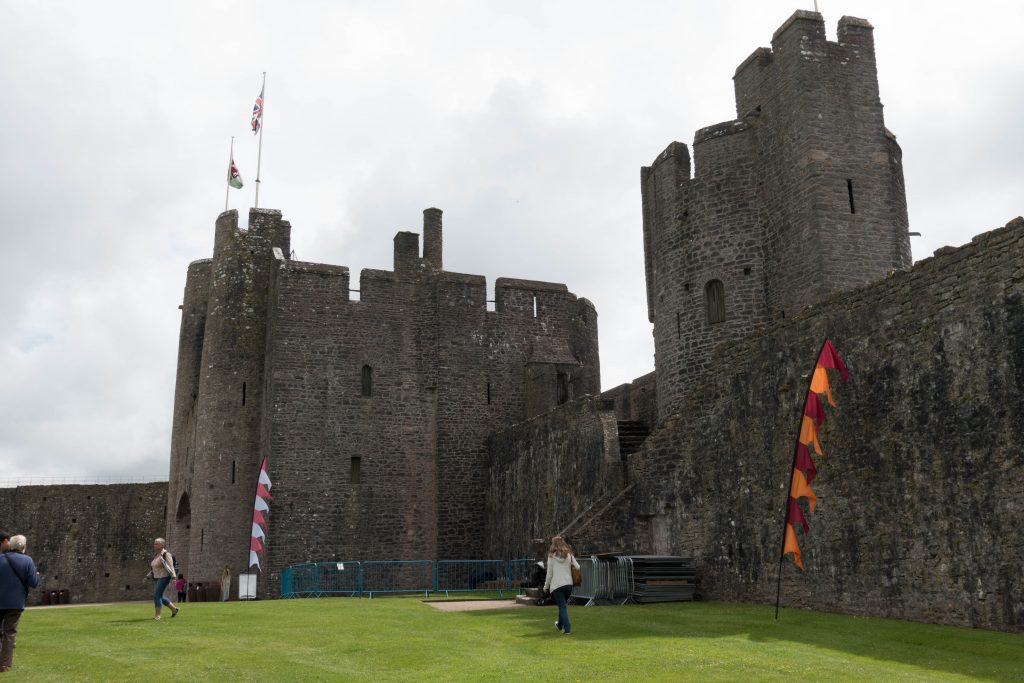 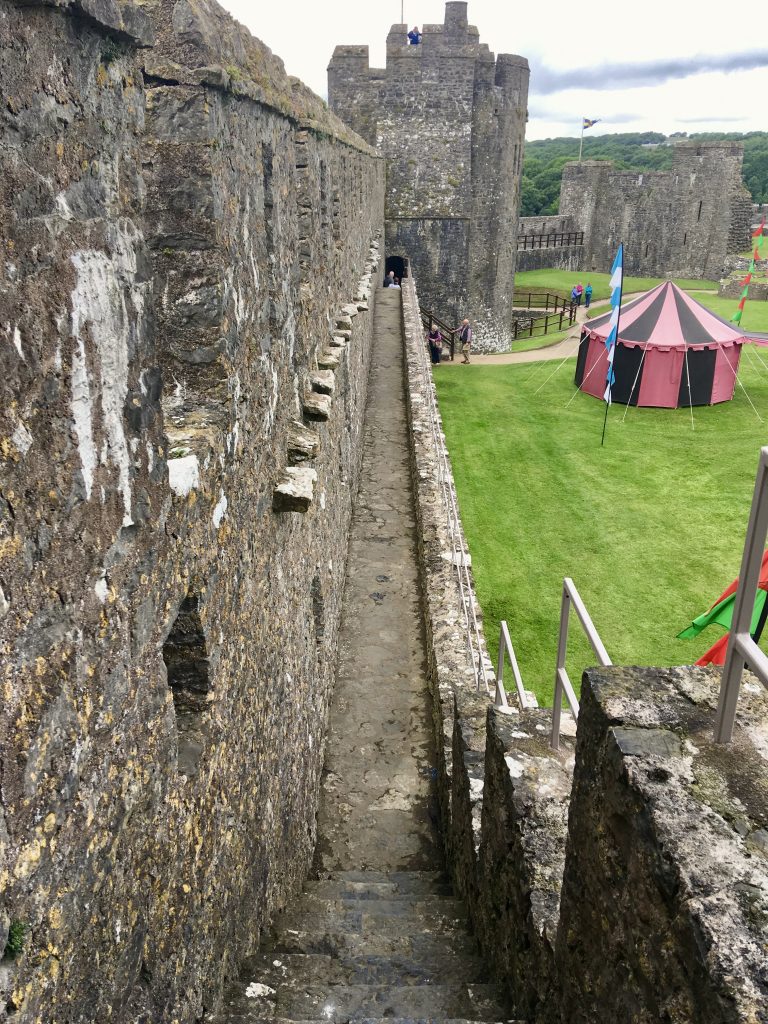 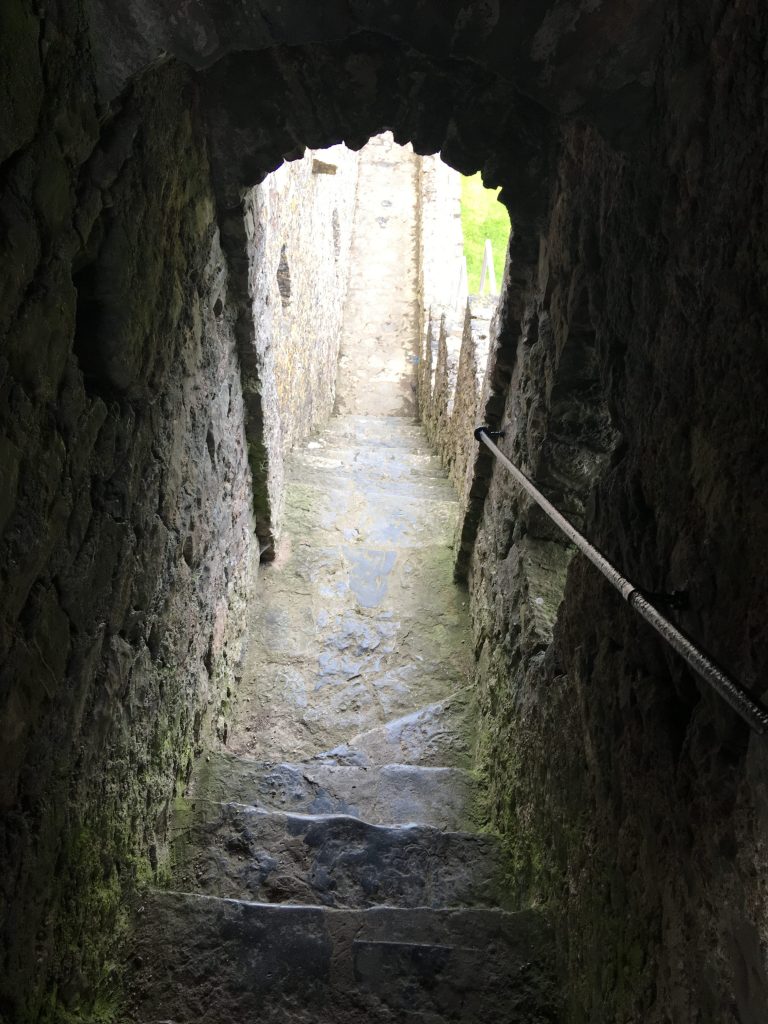 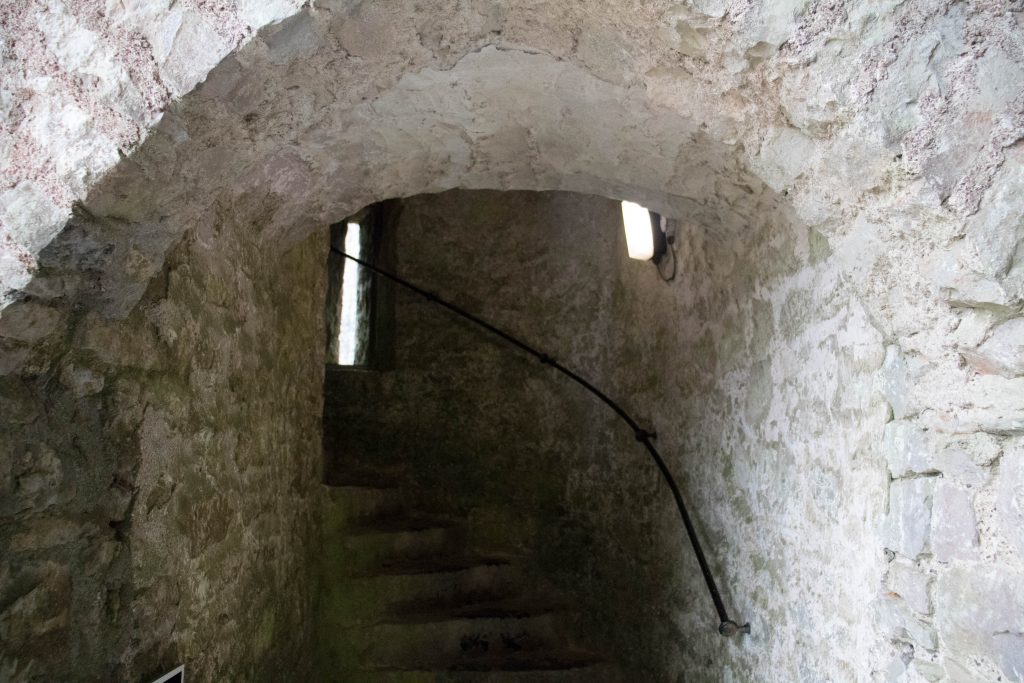 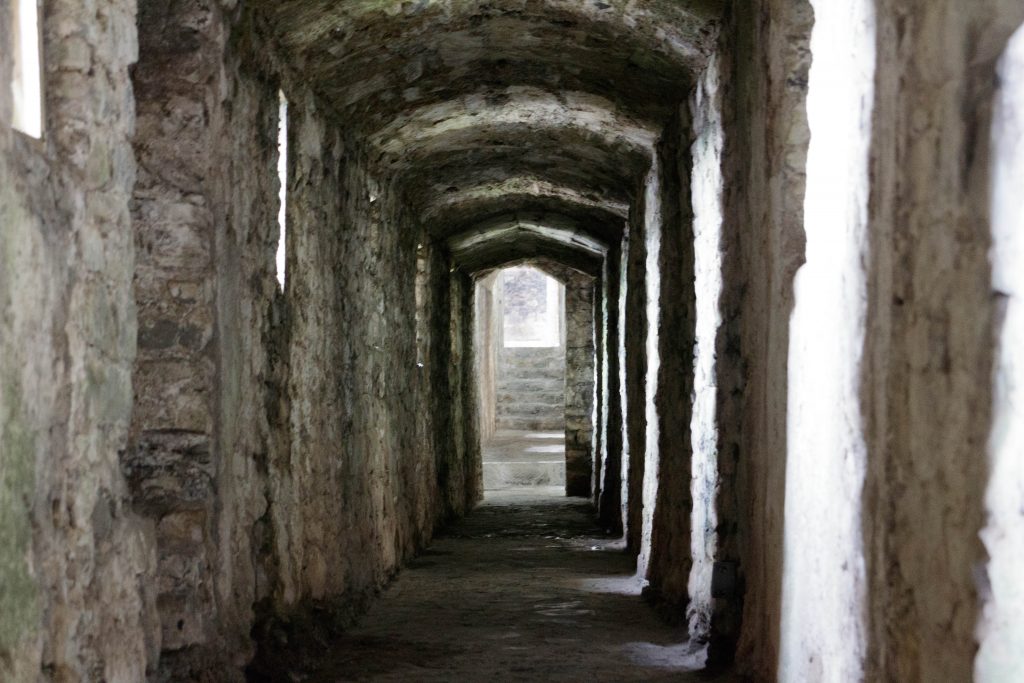 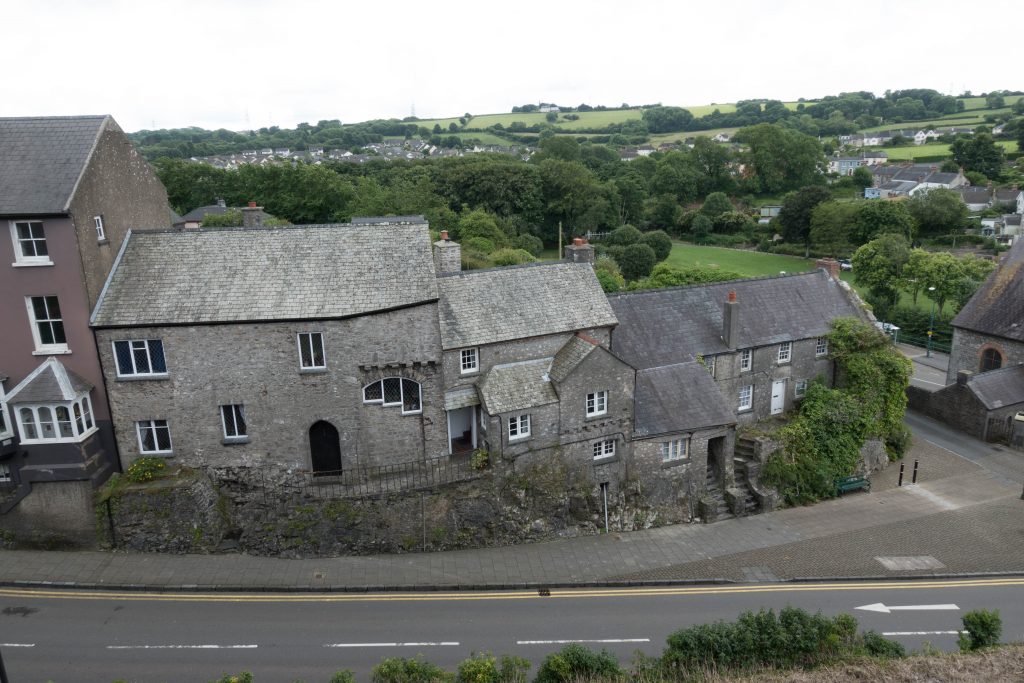 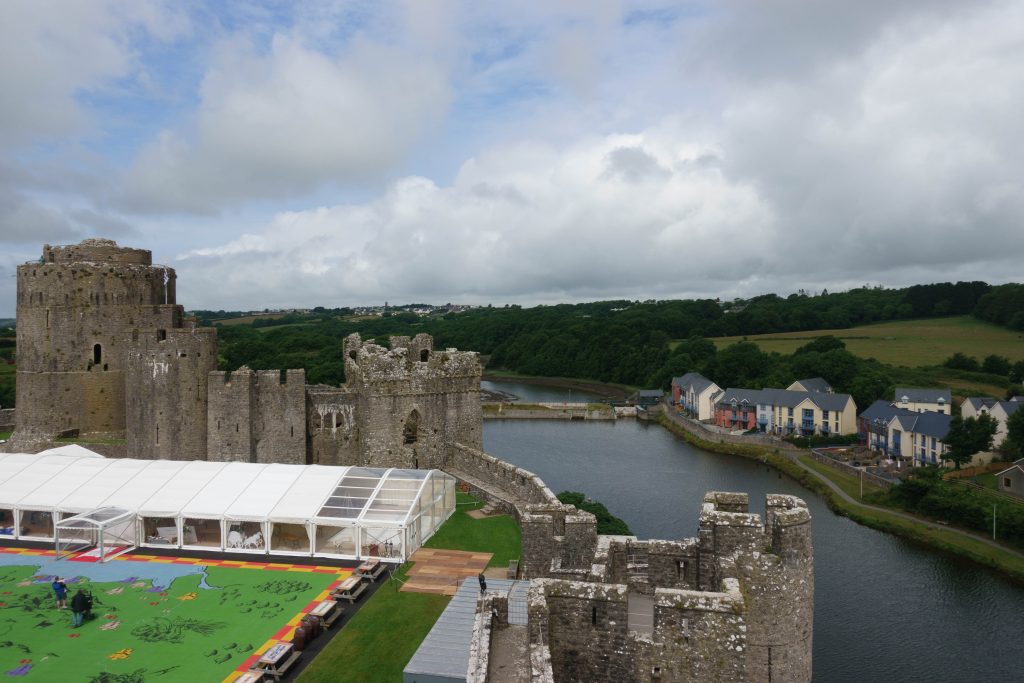 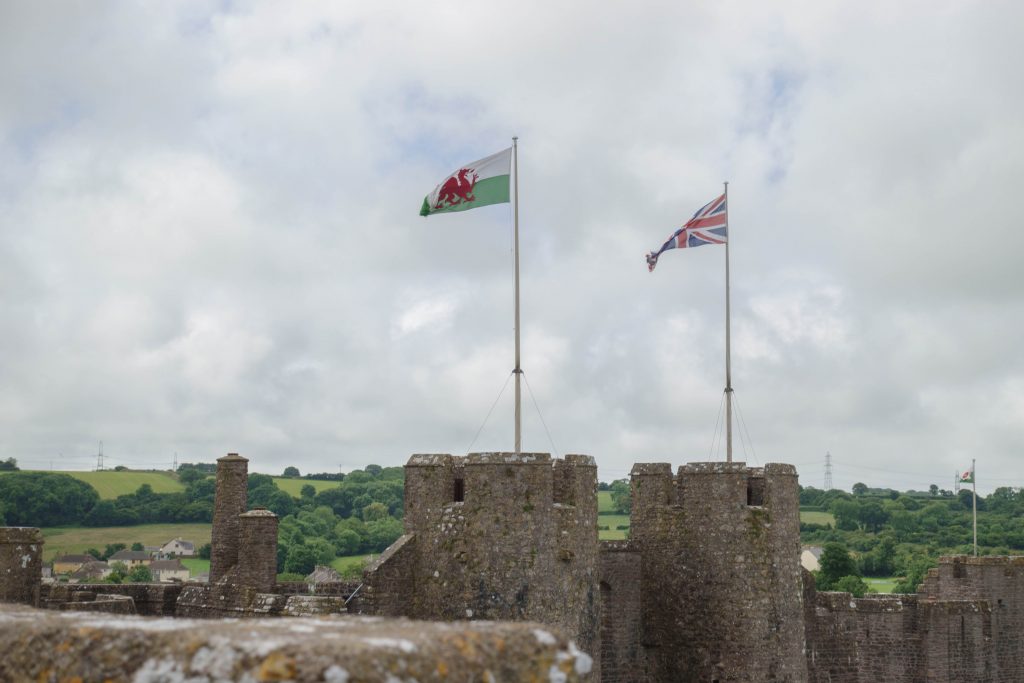 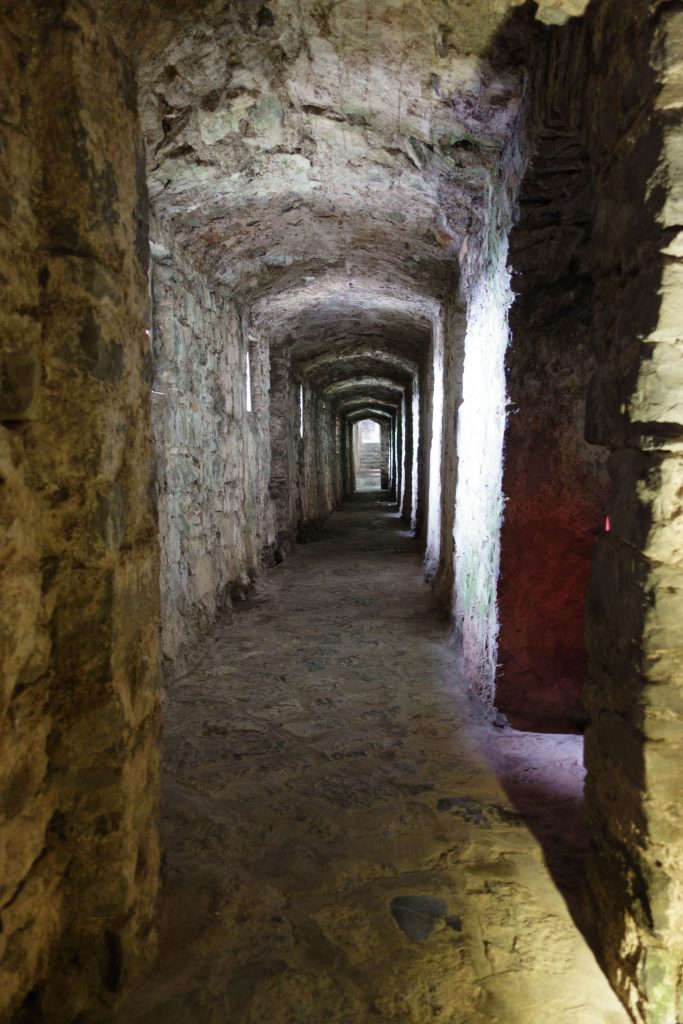 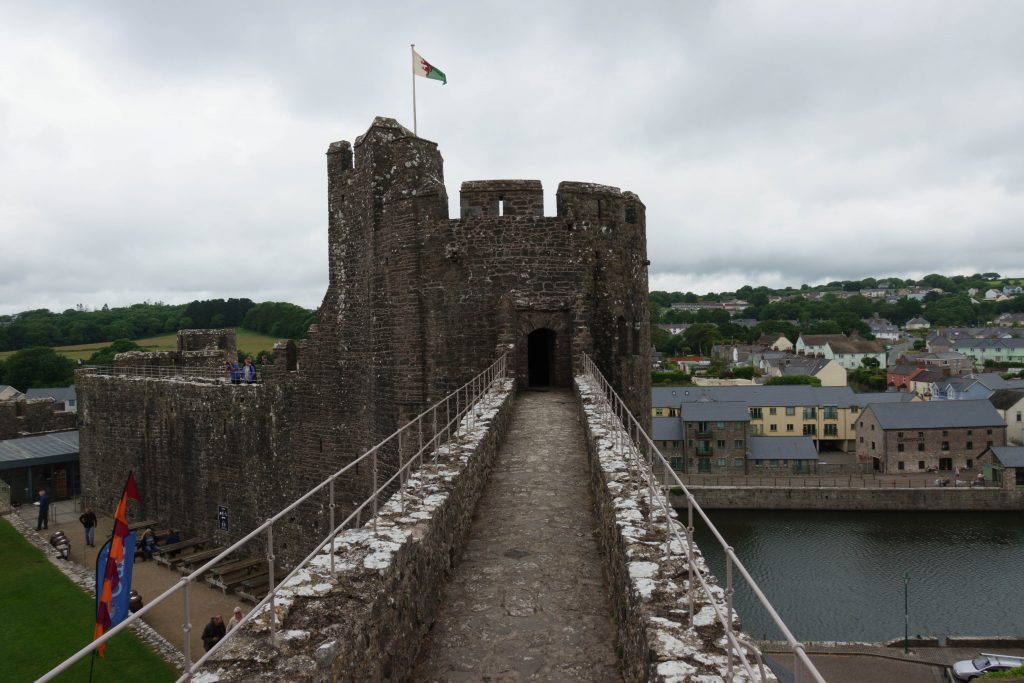 Spread out like a huge tablecloth over the lawn of the Outer Ward and surrounded by picnic tables, the map shows every castle and historical landmark in Wales and gives younger visitors somewhere to run off some of their boundless energy.

The massive marquee you can’t fail to miss in the background was in the process of being dismantled following a recent wedding reception. There’s no denying the castle is a gobsmackingly gorgeous venue to tie the knot, although, from the number of tables, floral displays and swathes of silk drapery we watched being carried out as we sat munching our lunch, it must have cost the happy couple a small fortune. The mind boggles!

For me though, my favourite part of the castle was The Great Keep.

The magnificent round Keep is one of the largest and finest of its kind to be built in Britain. It was also the first building constructed as part of the Inner Ward. Over twenty-five metres high and sixteen metres in diameter, with a huge domed roof, the tower once contained four storeys, each connected by an extremely tight spiral staircase that led to the battlements.

I was the only one of us willing to climb to the top. Correction, would have if I hadn’t stupidly looked down from the fourth floor and got a sudden attack of the wobbles. Not to be recommended if you don’t have a head for heights. 😯 Which was a pity, because if I had overcome my fear and carried on, I’m sure the view would have been amazing. And given me the chance to see the large putlog holes that once held the fighting platform that could be used as an extra defence should the castle come under attack.

The planked floors inside are long gone, but you can still see the Transitional Norman/Gothic arched windows/doors and huge masonry holes that held their timber supports. 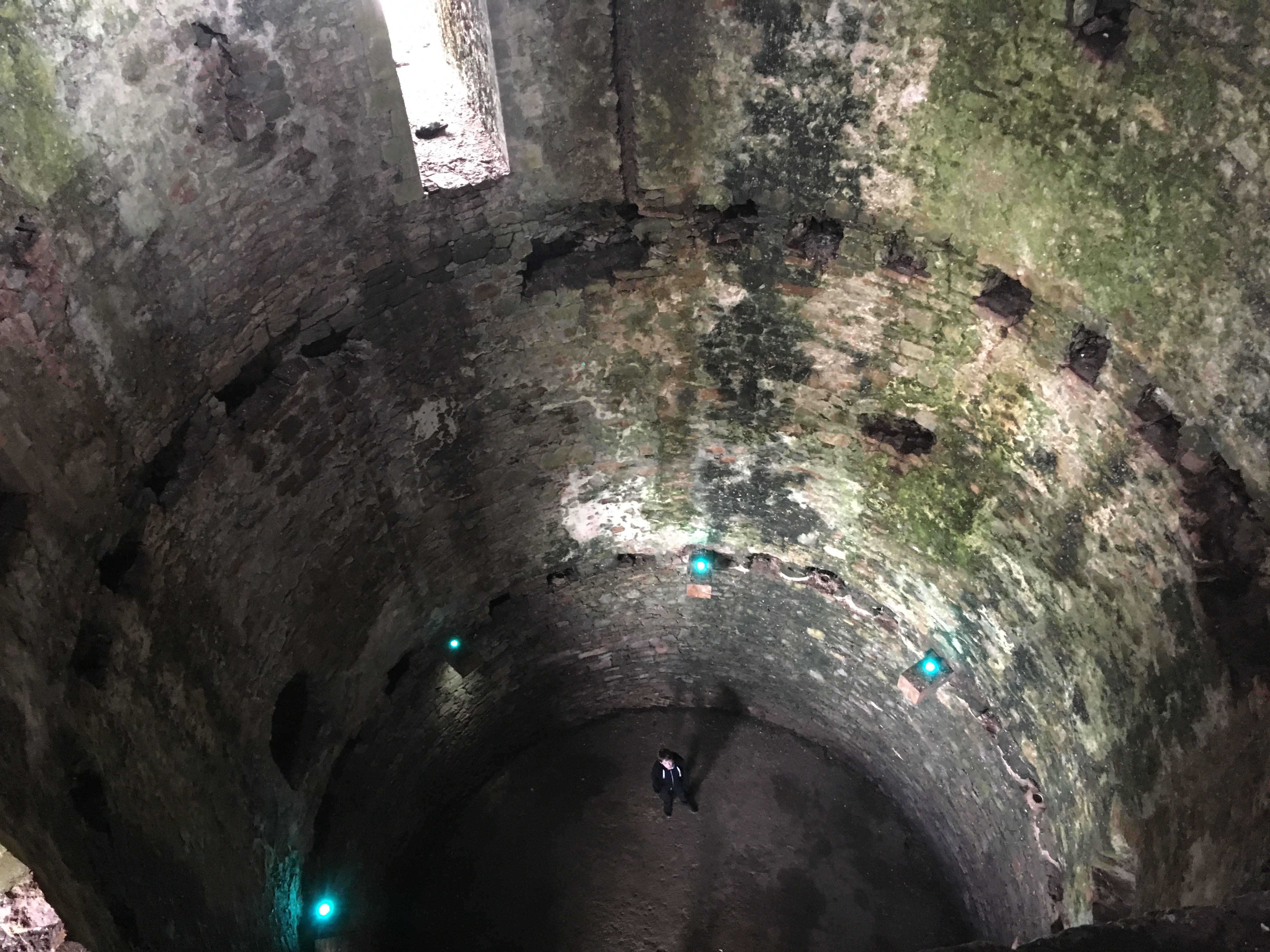 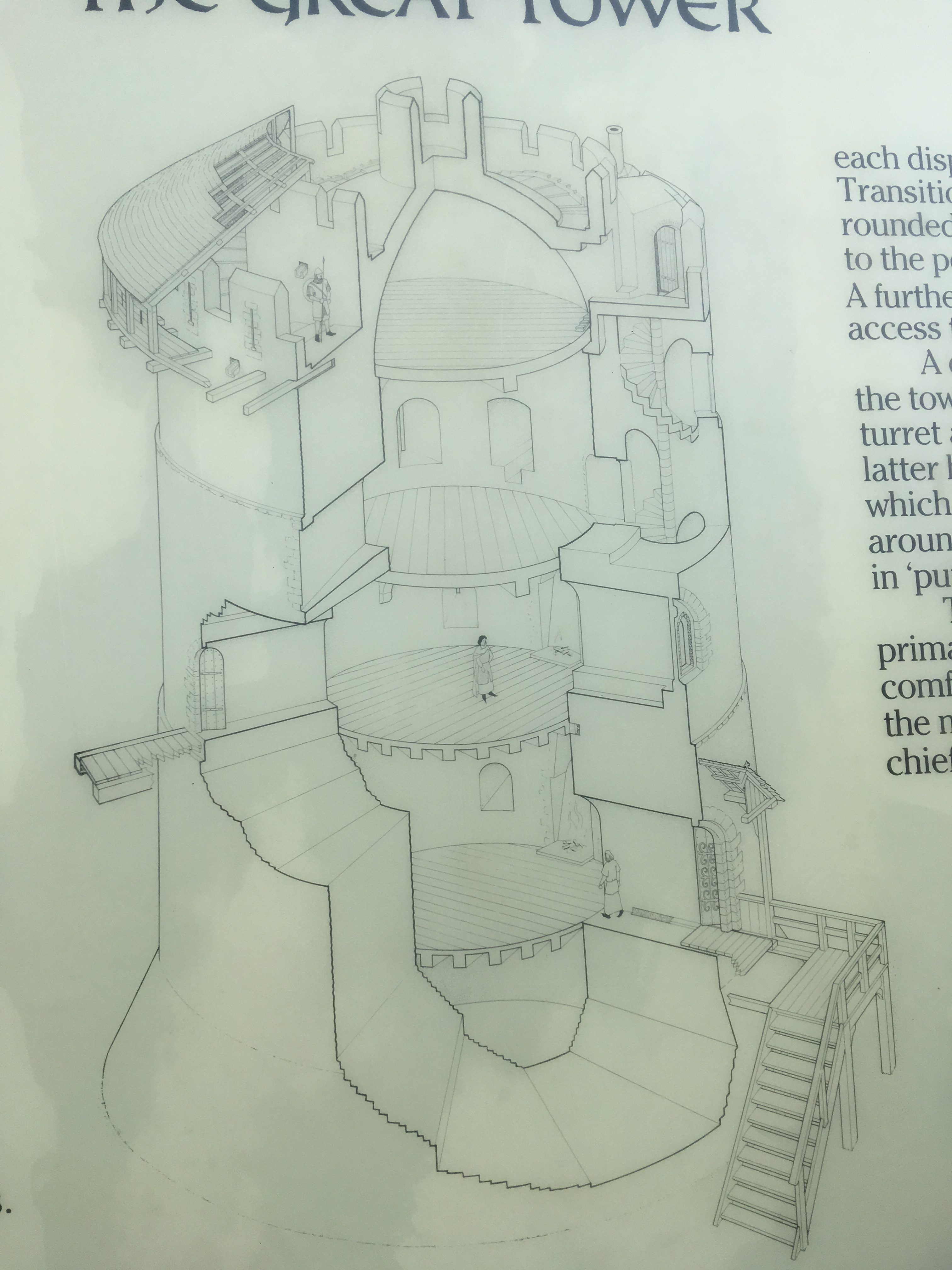 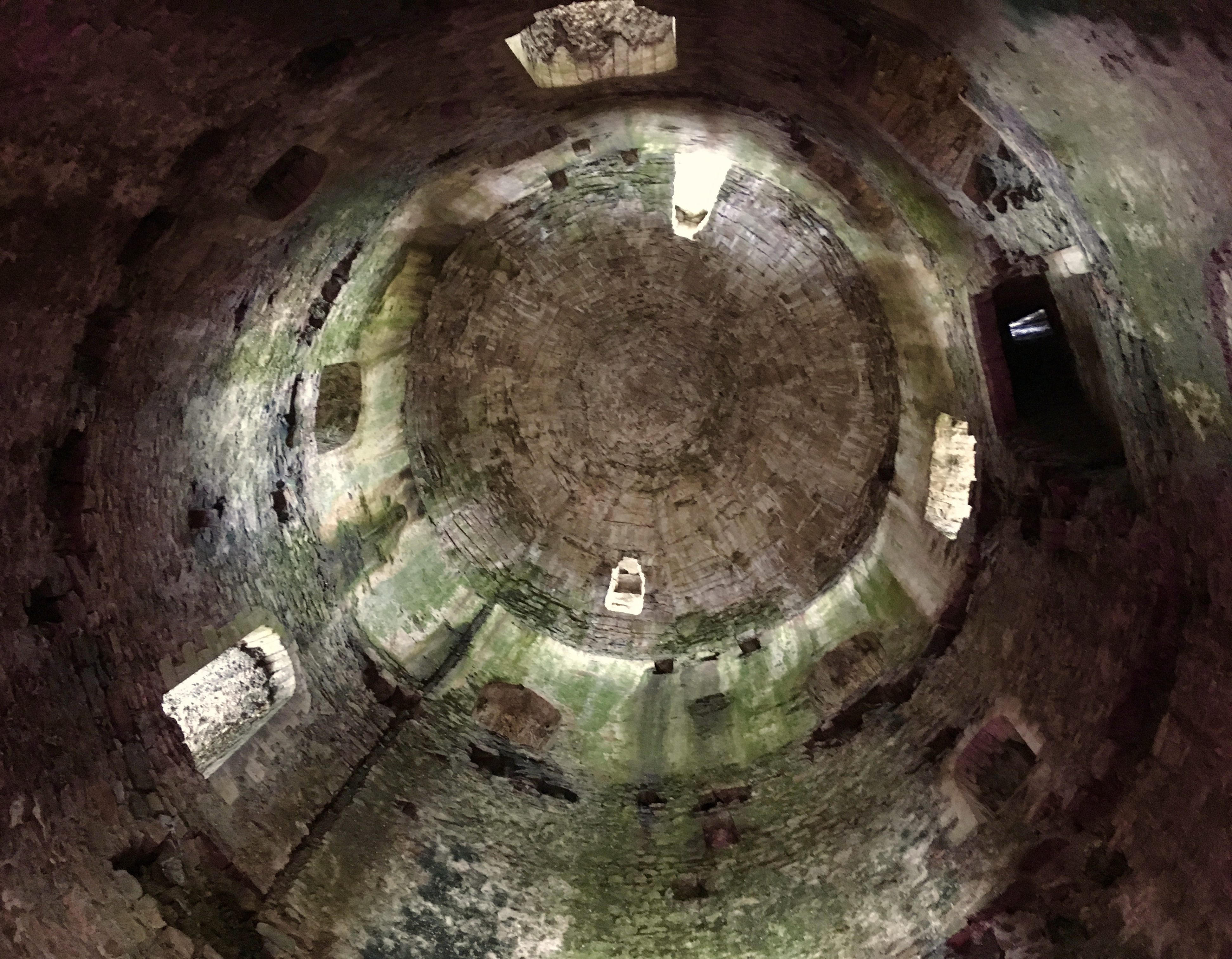 Some of the buildings inside the Inner Ward were constructed at the same time as the Keep, such as the horseshoe-shaped gateway, William Marshal’s private apartments and other domestic buildings. Additional sections were added by Marshal’s sons, and later in the 13th Century by the Valence family, who enlarged and strengthened the castle’s defences further by building the oval curtain wall and towers of the Outer Ward. They also created a new 2-storey Great Hall to impress their guests, part of which encloses the vast cavern situated beneath the castle, known as The Wogan.

As many of the story locations in my fantasy world take place inside caverns and underground passages, it should be no surprise that this was my second favourite part of the castle. 😀

Accessed from inside the Great Hall, a steep spiral staircase led us down into the dark and dank cave that at one time served as storage for the castle occupants and also possibly doubled as a boathouse to secretly transport goods and people upriver. Thankfully, the tall arched windows cut into the cliff face allowed in just enough natural light for us to explore all the hidden nooks and crannies, and marvel – not just at the fluorescent green and purple lichen coating the limestone walls – but all the many diverse lives who may have taken shelter within them since prehistoric times. 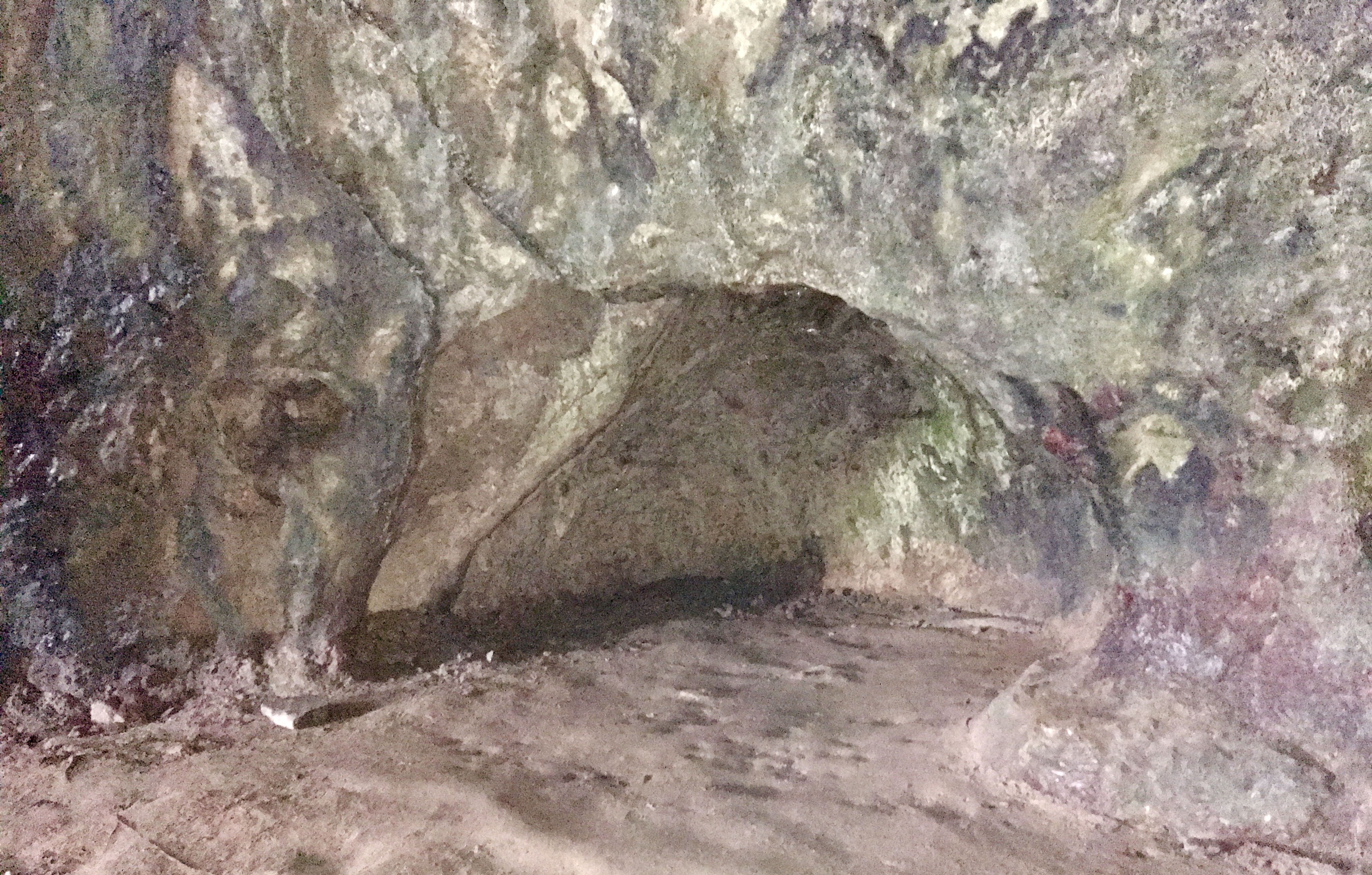 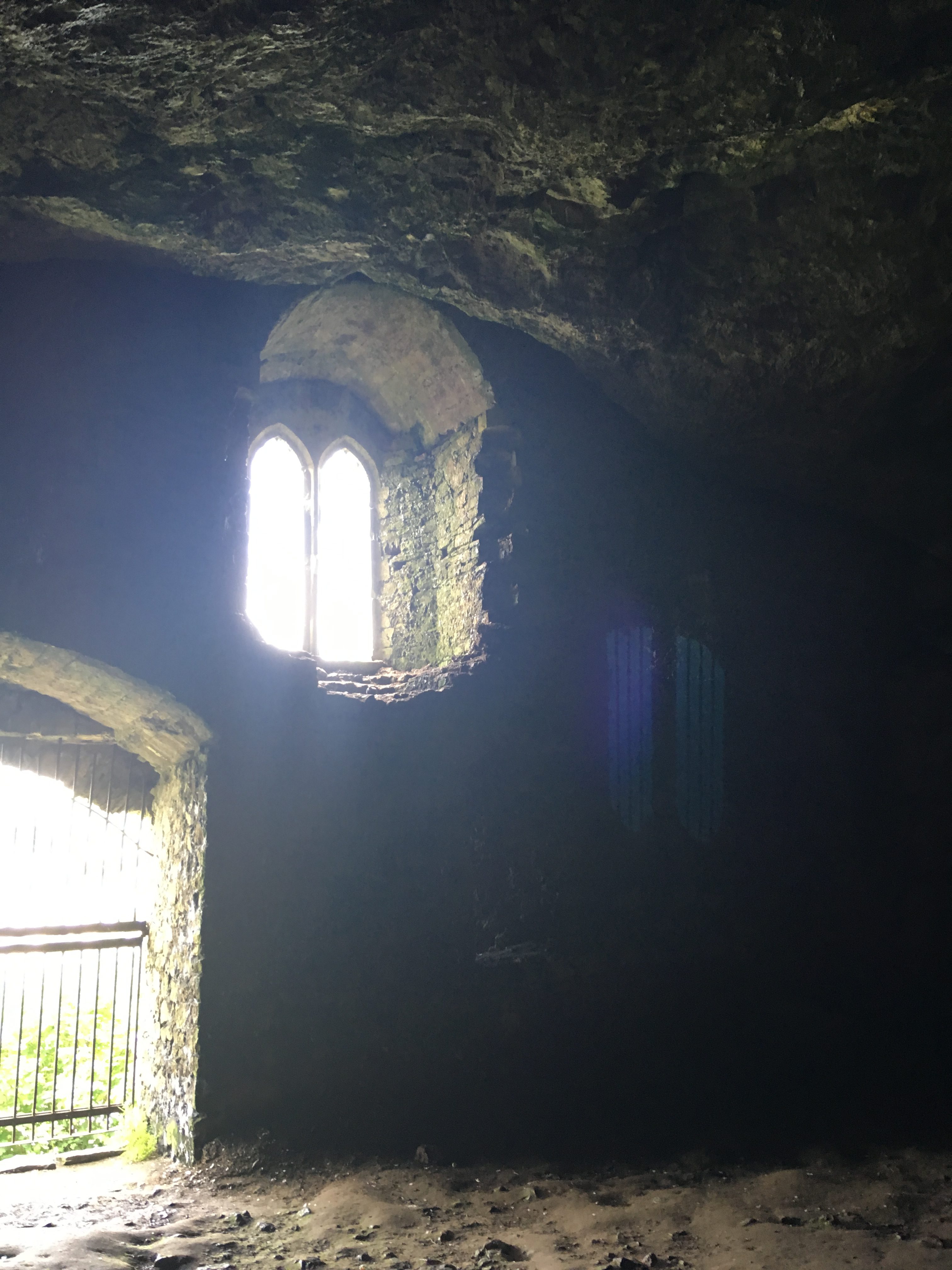 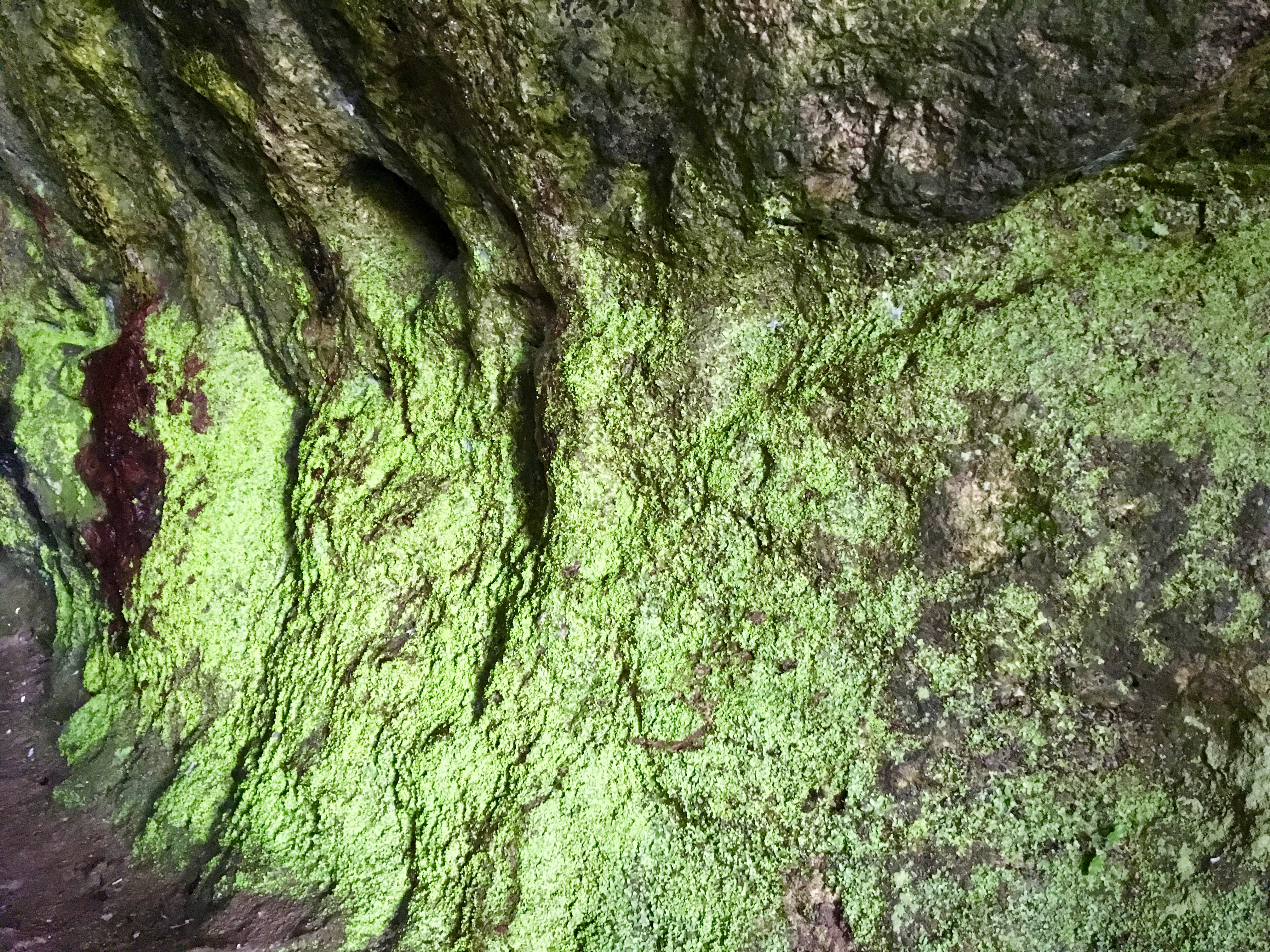 Thought no artefacts have been found in Wogan Cavern, the discovery of Roman coins and flint tools nearby suggest that it has been occupied for thousands of years, and may even have provided shelter for cave dwellers during the last Ice Age. Due to the defensive and sheltered location of the headland, it’s likely this was also the site of an Iron Age Fort. To think that the hands of a Roman soldier, Celtic warrior or even a neolithic ancestor may have touched the same fissured walls I couldn’t resist stroking was both a surreal and humbling experience.

Oh, if only those walls could speak …

Over the course of its long and tumultuous history, Pembroke Castle has gone through several architectural trends, passed through generations of powerful families, including The Crown, and even survived the Welsh Revolt by Owain Glyndwr. Until in 1648, after centuries of peace, Oliver Cromwell laid siege to the castle during the English Civil War and it finally fell into disrepair. Some work was undertaken during the late Victorian era, but it wasn’t until after the First World War that the castle was fully restored by Major-General Sir Ivor Philipps to its former glory.

And thanks the stars he did, because there’s so much to see and explore inside Pembroke’s formidable walls to have allowed them to crumble into an ivy-covered ruin would have been a tragic waste of one of Pembrokeshire’s most prized historical treasures.

If you happen to be passing through this part of Wales, I urge you to pay this great castle a visit. It’s an experience not to be missed.

I hope you’ll join me on the next part of our Pembrokeshire adventure: Sailing around Ramsey Island. 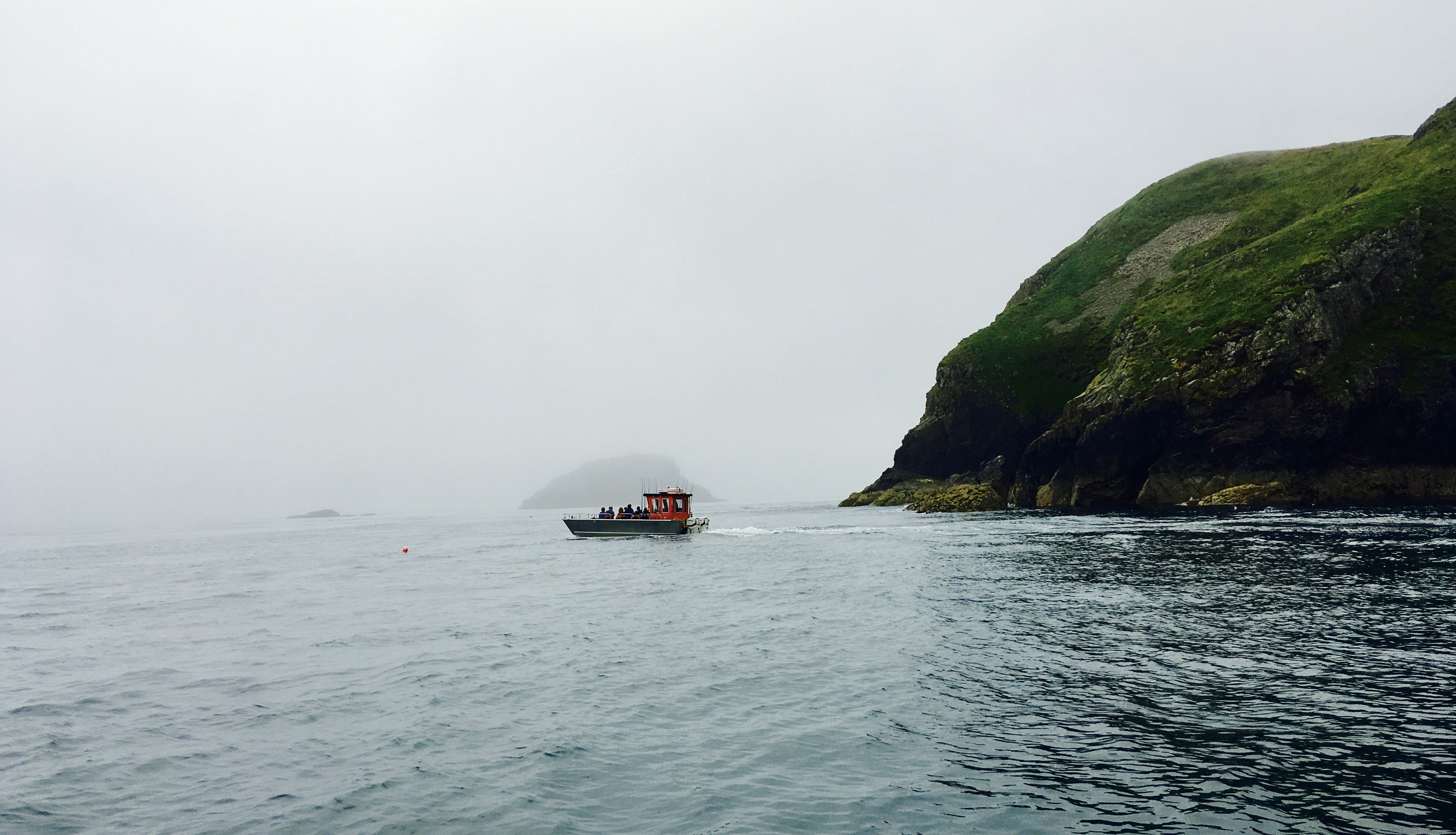