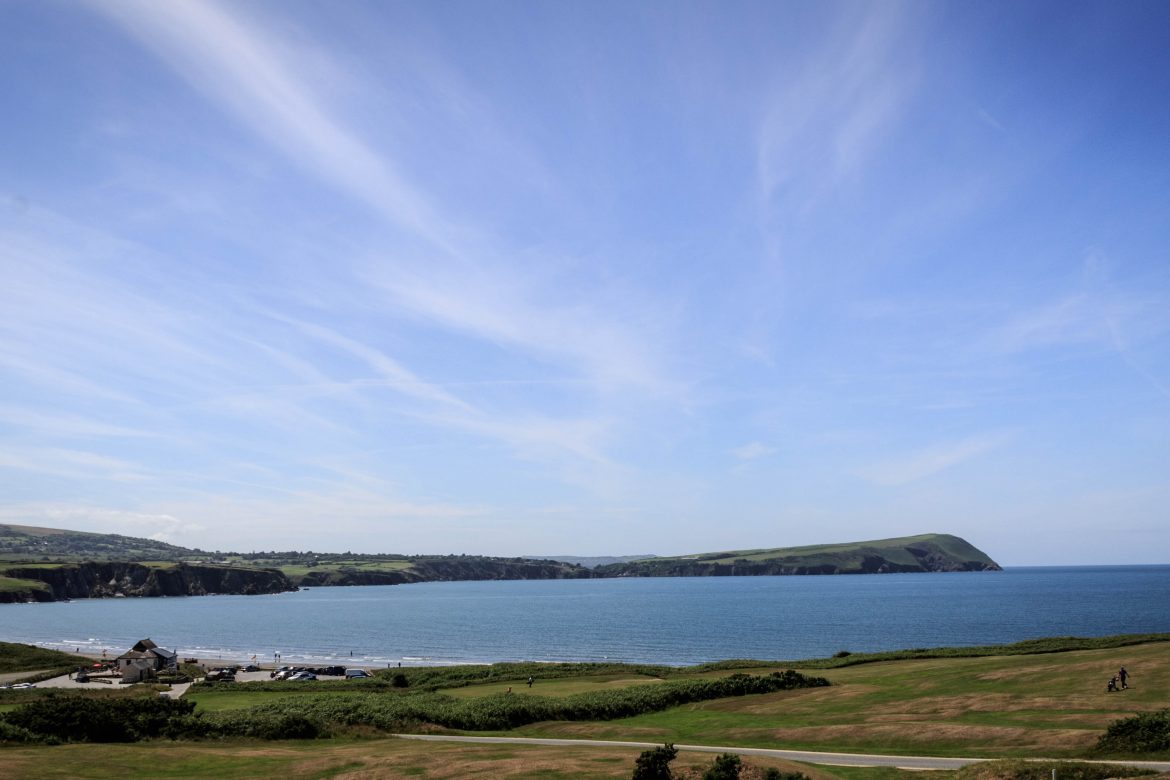 Summer has arrived – apparently. I’ve been so entrenched in my writing cave, I probably would have let it float merrily on by without so much as glance up from my computer screen if two bored teenagers hadn’t started flicking stones at my precious MacBook. At first I ignored them, annoyed and slightly unsettled by their rare and unexpected appearance into my subterranean domain. And then it hit me – not one of their badly-aimed pebbles – but the full horror of why they were pestering me at 10.30am when they should be at school.

And why there was a strange carefree glint in their eyes.

In my preoccupation to finish the first draft of The Caves of Tavannar, (which is just over three quarters written) I’d foolishly forgotten to check the calendar. If I had, I might have been better prepared for the seven-week stretch of writer’s angst looming long and large ahead of me – aka school holidays.

Don’t panic, I told myself, suddenly remembering something else I’d shoved out of my overloaded brain. We were off to Wales in two days time. Hopefully that would be enough to keep any teenage moping and bickering at bay – for the next seven days anyway.

And what better holiday destination to give my neglected wings a long-overdue airing than the land of dragons. Or, as it’s more traditionally known in Wales, the land of song.

From dramatic coastlands and leafy woodlands to lush green valleys and breathtaking mountains, this wild and ruggedly handsome land is as diverse as its rich cultural heritage. A land steeped in history, magic and legend, with a strong Celtic culture that’s very much alive and kicking. Not to mention more ancient monuments and castles per square mile than even my beloved Scotland.

In short, a storyteller’s paradise.

In fact, there was so much epicness to behold during our week in Wales, it was impossible to cram it all into just one blog post. Instead, I’ve decided to split into a tale of five parts, which I hope will give you a more satisfying picture of what this unique corner of Britain has to offer.

So, without further ado, let the adventure begin.

Which hubby promptly ignored and carried on with his game of suitcase Tetris. Finally, once the car boot met with his OCD approval, we set off on the seven and half hour journey the Sat Nav claimed it would take to reach our destination in North Pembrokeshire. Or would have taken, if we hadn’t had to double back half an hour later because someone (points big foam finger towards the back seat) forgot to pack their raincoat. Going by the thunderclouds gathering rapidly inside the car, we were going to need them. Fortunately, by the time we reached The Lake District the dark clouds were all but a distant memory. It’s amazing what some good tunes, a pack of jelly babies and the sight of the sun can do to lift the tension. I even saw my first lenticular cloud. Yay!

Several stiff and weary hours later, after a detour through some incredible mist-shrouded valleys and the usual holiday argument over directions – which resulted in a magical mystery tour through some extremely narrow and twisty roads flanked by tall bushy hedges, (similar to the country roads in Cornwall) – we arrived at our holiday cottage.

I wish now I’d had the foresight to take a pic of the basket of goodies the kind owner had left for us, but at the time I was more concerned with finding the loo. Lets just say, most of it didn’t last the night, apart from the local chocolate which I surreptitiously spirited away for later. 😉  Once I was feeling a bit more human and my stomach was pleasantly full of the local bread and honey, it was time to explore.

And what should I see when I first looked out of the patio doors into the back garden? A rabbit chewing the grass. Then, as I gazed into the meadow beyond…

Next morning, we woke up to gorgeous blue skies, which left me with a dilemma. Stock up on groceries first or… hit the beach. Guess which won? Turns out throwing caution to the wind would come back to bite me. How was I supposed to know all the local shops closed at 4 pm on a Sunday.

Aside from this minor setback, everyone enjoyed the rare opportunity to soak up some rays on the beach at Newport Sands, or as it’s known in Welsh, Traeth Mawr (Big Beach ) one of the few beaches in Pembrokeshire you’re allowed to park your car. Situated at the mouth of the Nivern Estuary in Cardigan Bay, a short drive from the village of Newport, this mile-long stretch of flat golden sand provides stunning views over the bay and the Irish Sea. Considered to be one of the best beaches in the area, it’s easy to see why it’s a popular destination with watersports enthusiasts. At low tide, you can even walk across the river Nevern to Parrog Beach.

The gorgeous panoramic views also gave my eldest son the chance to break in his new camera. Most of pics I’ve posted were actually taken by his discerning teenage eye, for which he deserves a mention. Thank you, Harry 🙂 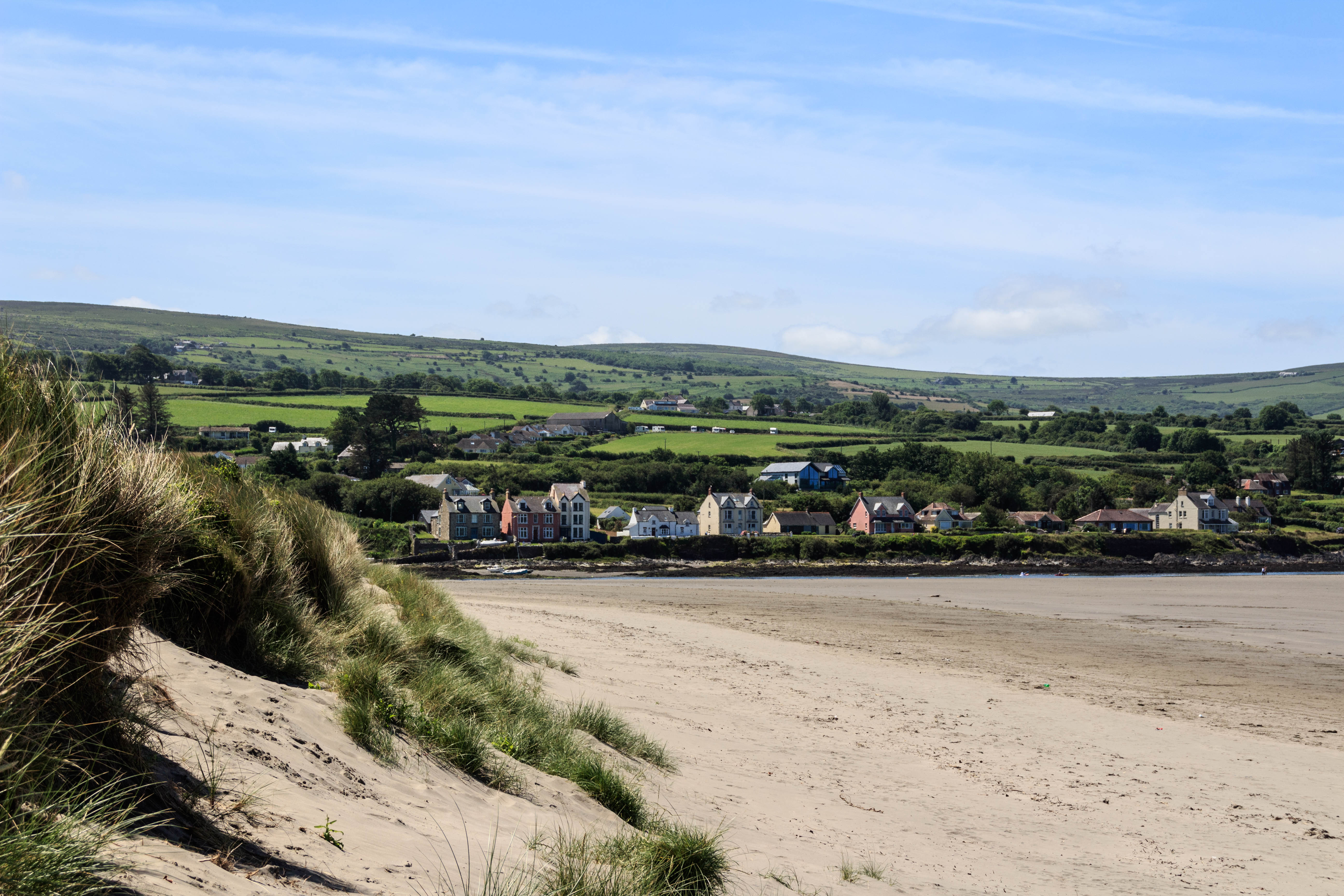 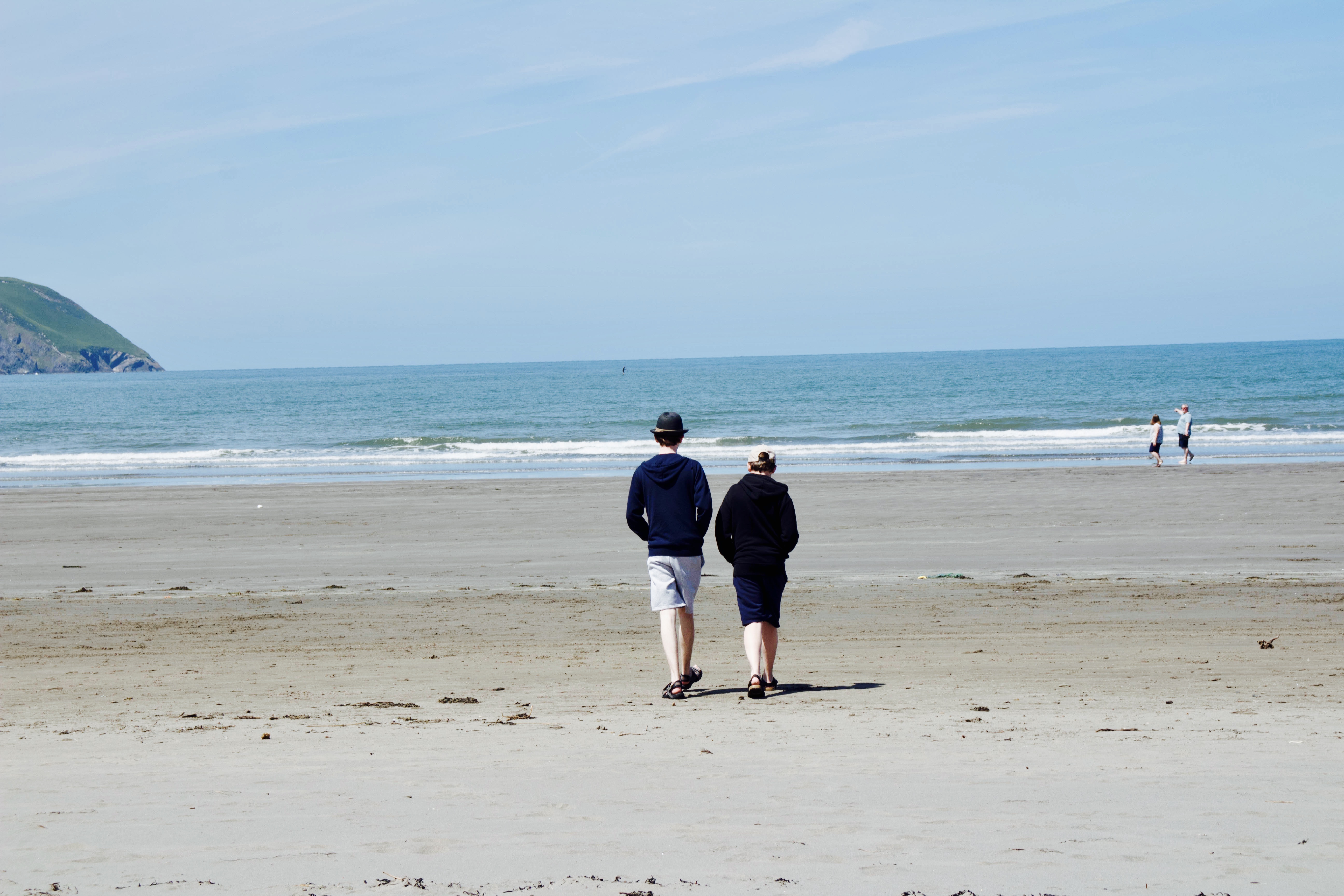 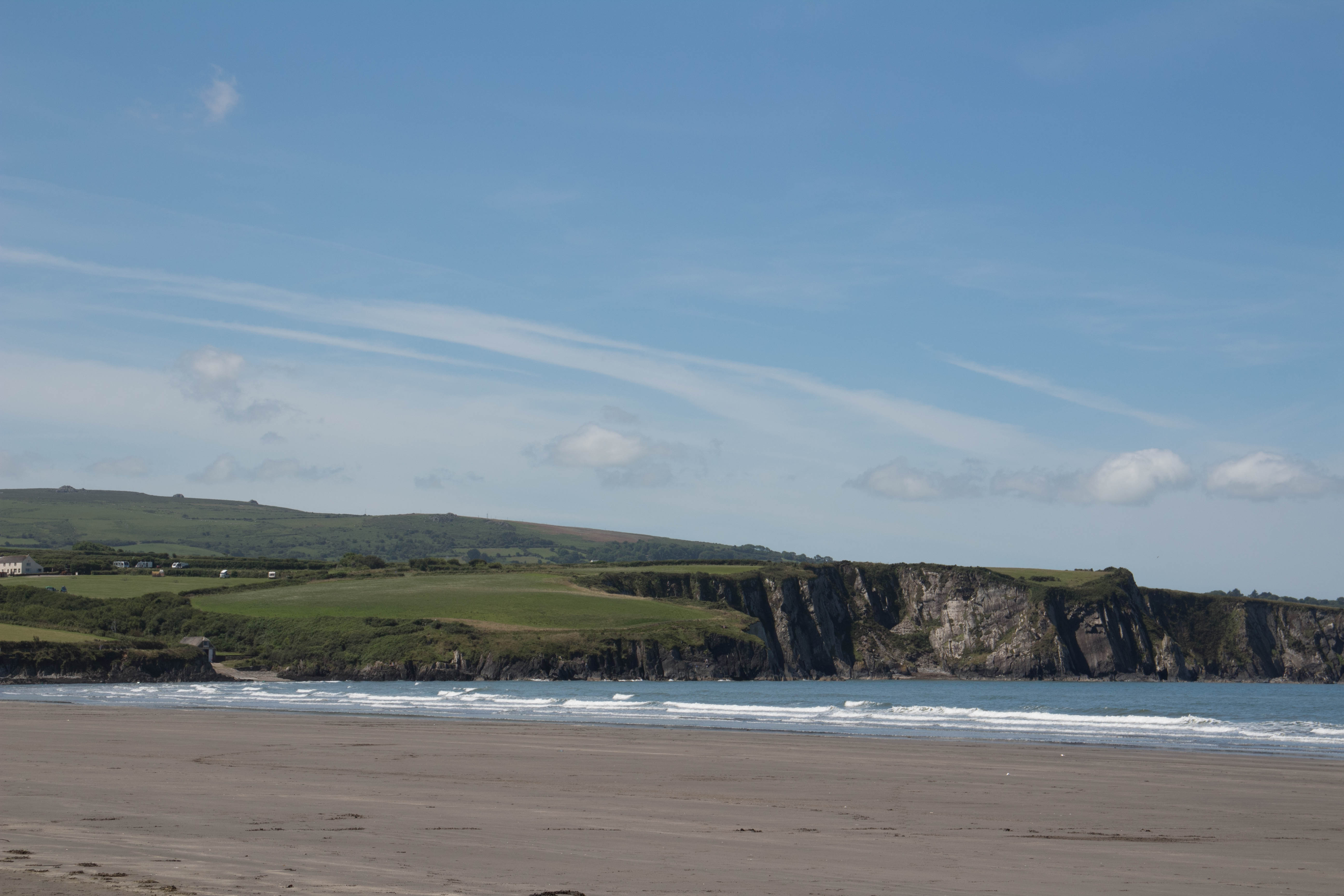 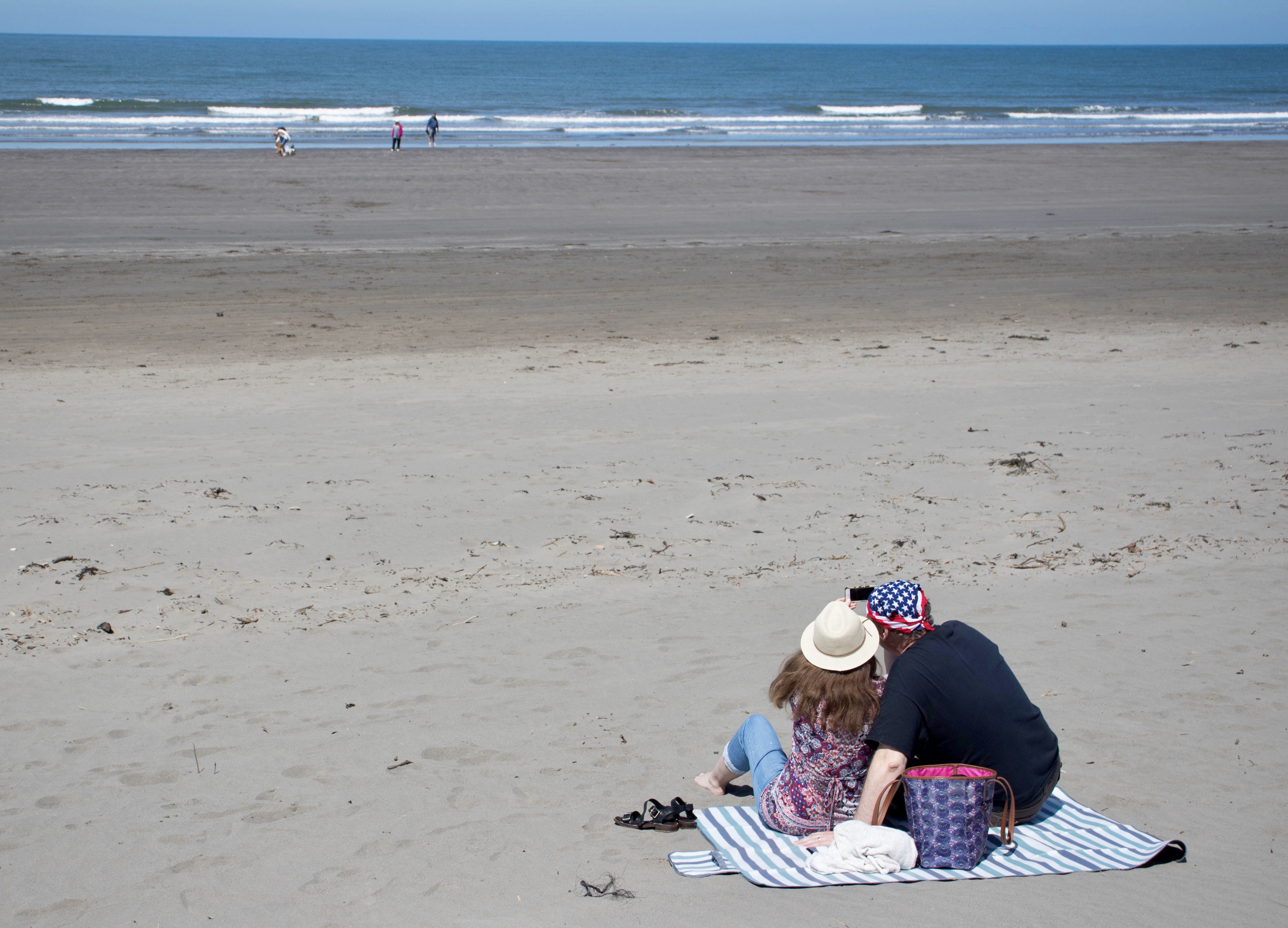 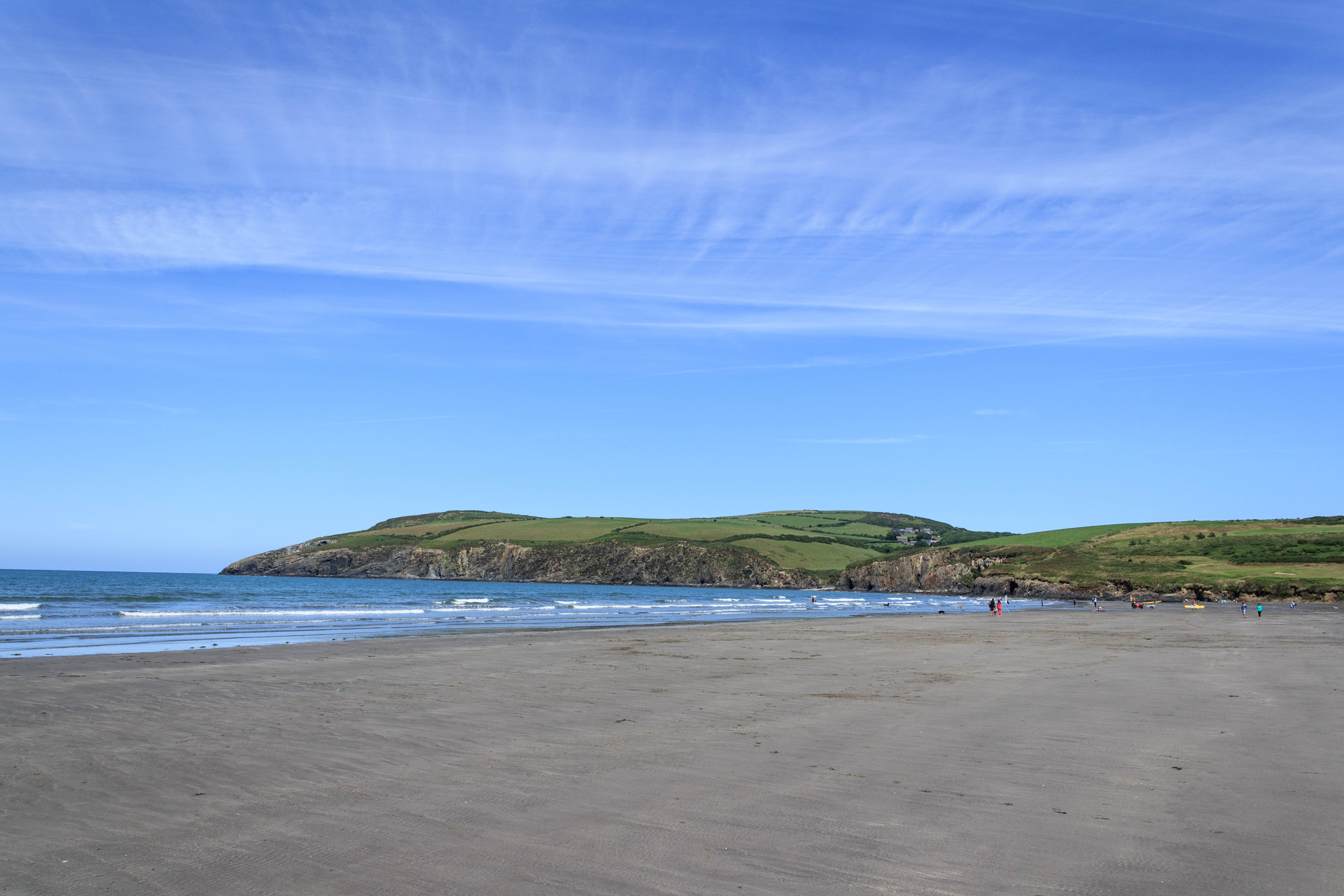 Unsurprisingly, it didn’t take long for our pasty Scottish skins to start feeling the burn, at which point we decided to take a bracing hike over the surrounding limestone cliffs. In the end, we only walked a tiny part of the 186 mile Pembrokeshire’s National Coastal Trail, which runs between the villages of St Dogmaels in the north to Amroth in the south, and provides more spectacular views of the many coves, harbours and beaches, offshore stacks and islands, quaint fishing villages and abundant wildlife along the route.

We would’ve ventured further, but it was way too hot a day to be trekking up and down steep cliff tops. That, and I was stupidly wearing slippery-soled sandals instead of sensible hiking boots. But every cloud has a silver lining – or, in my case, a rum and raisin ice-cream cone at the end of the path to make up for the chafing blisters.  😎 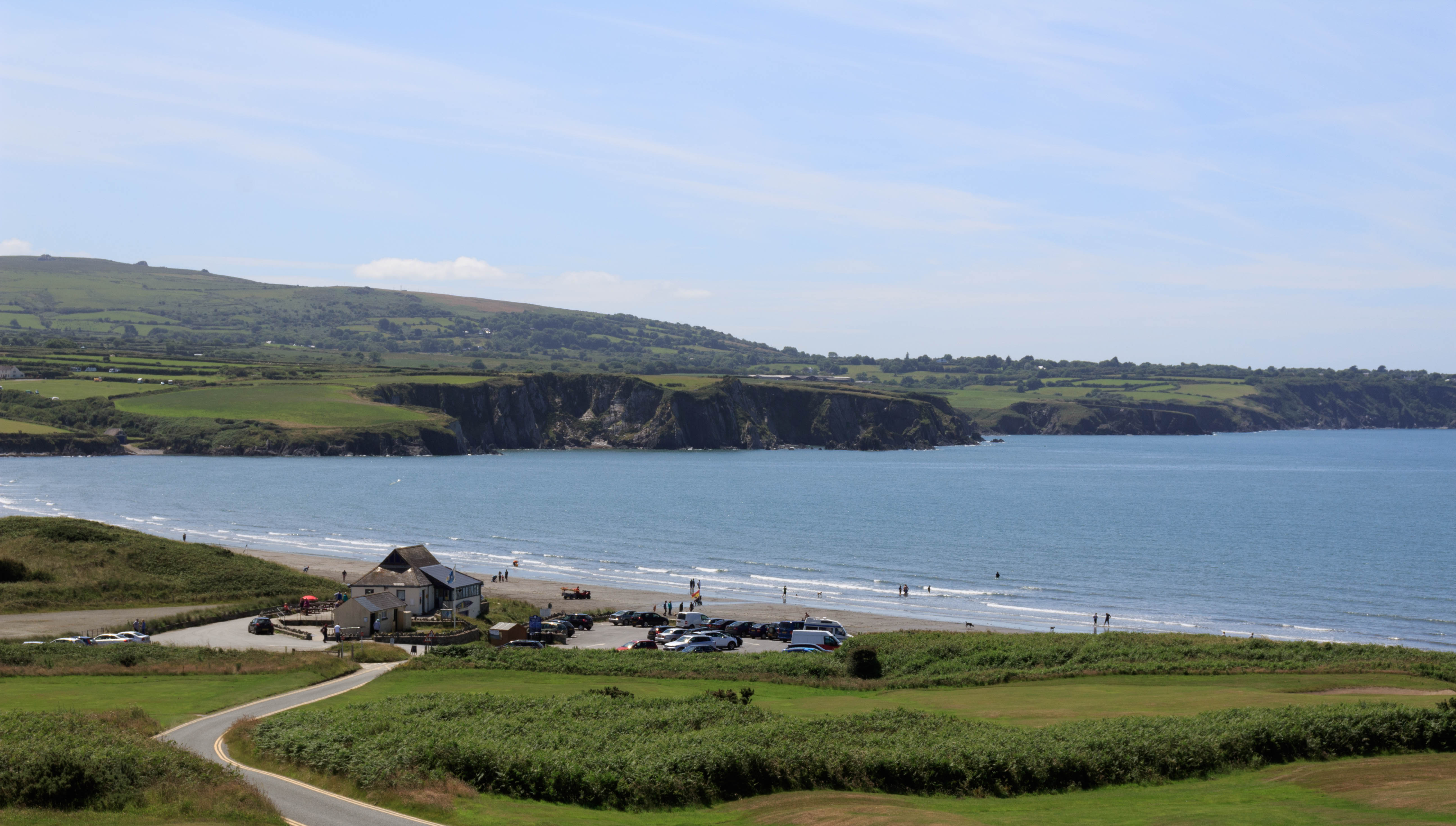 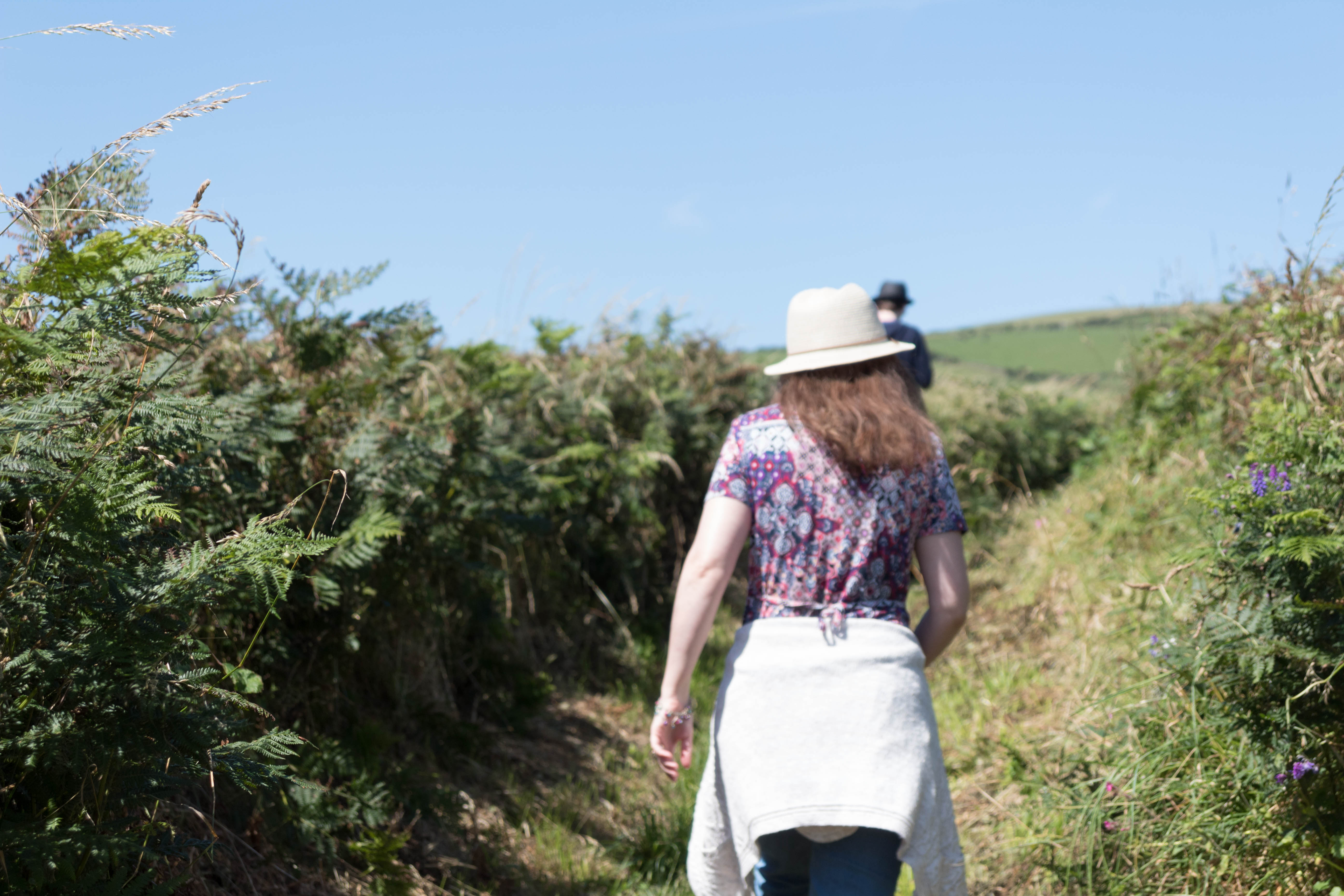 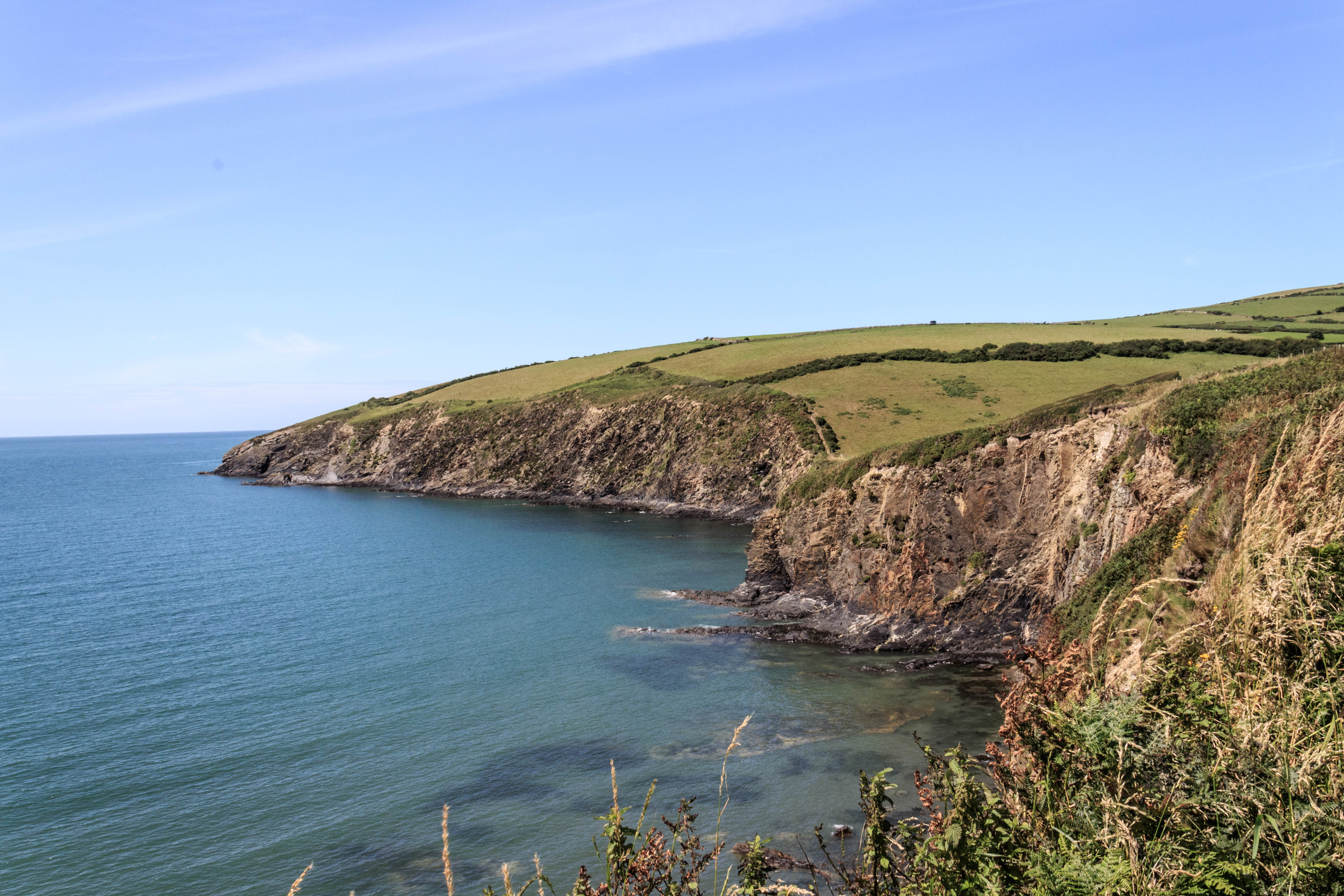 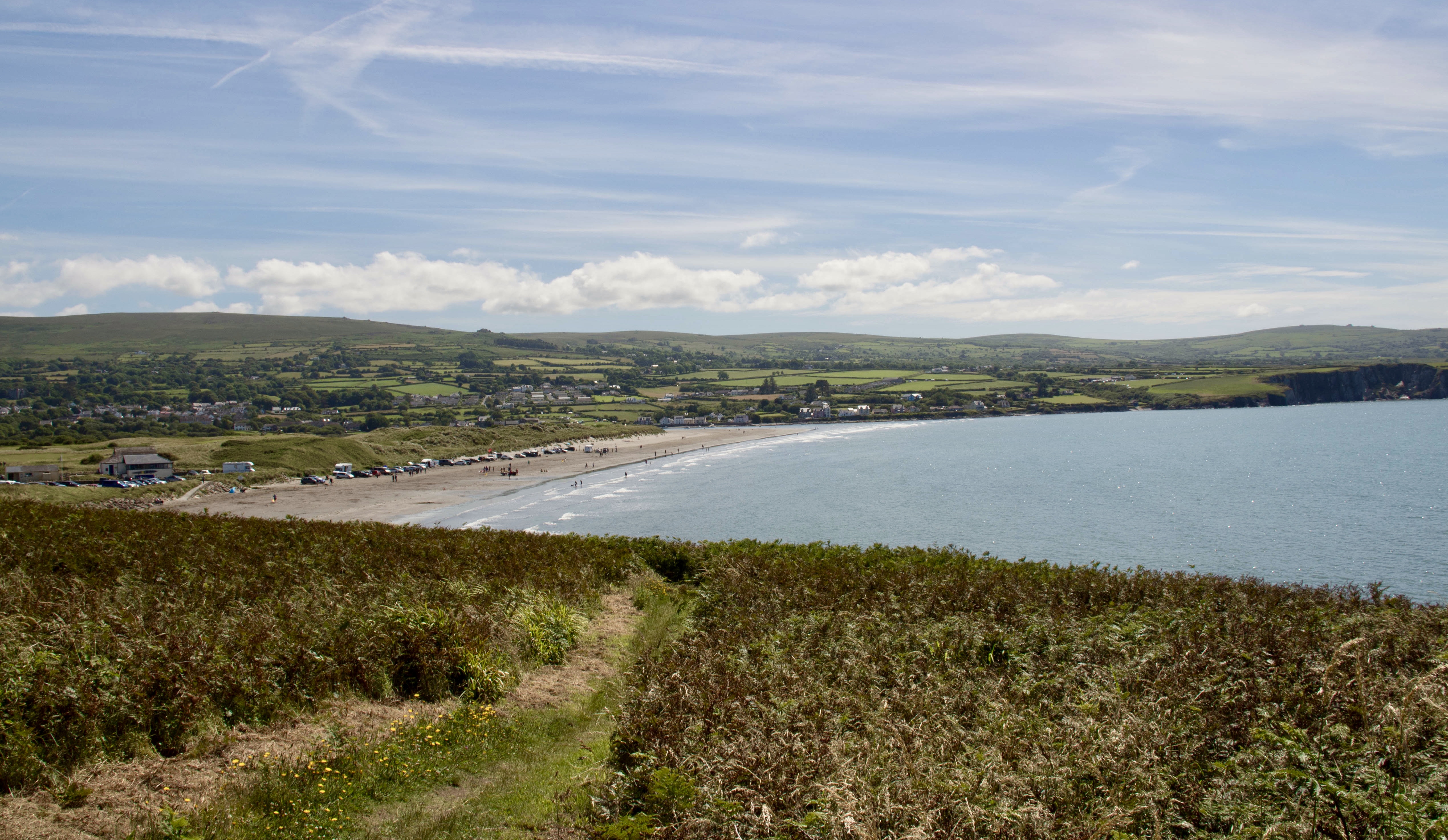 Next stop on the itinerary: Pembroke Castle. See you there!