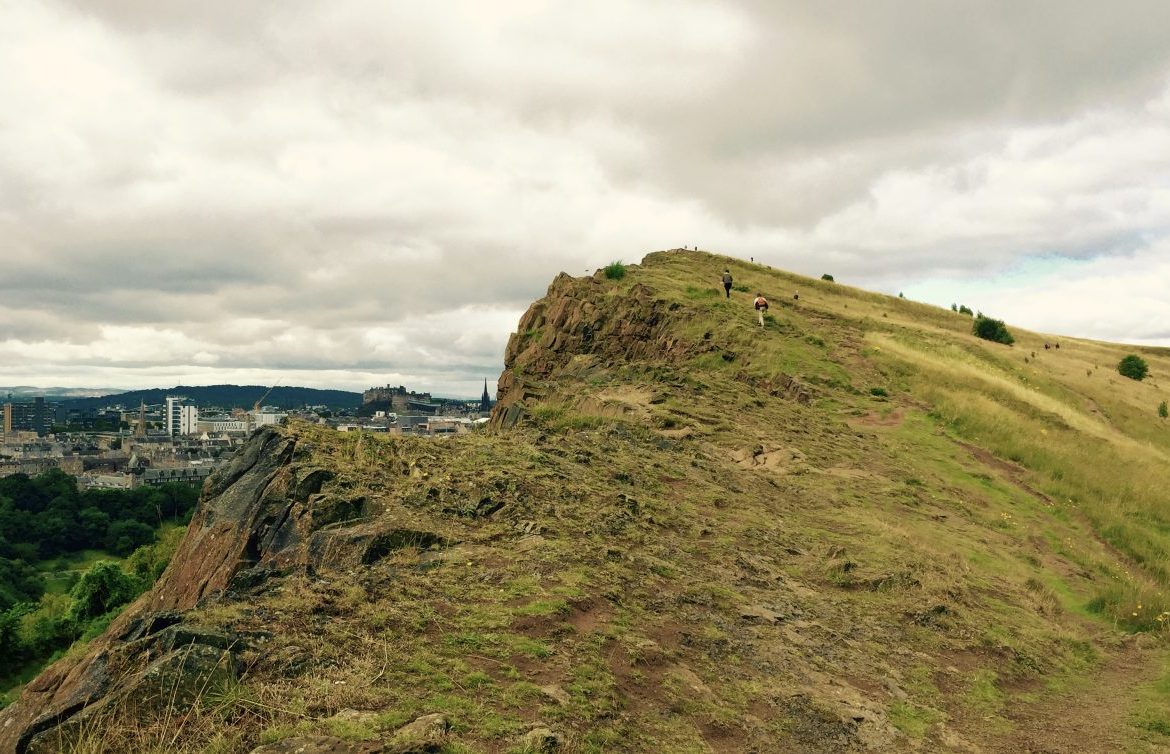 Seat of Stone and Legend. Hill of Magnitude and Love. 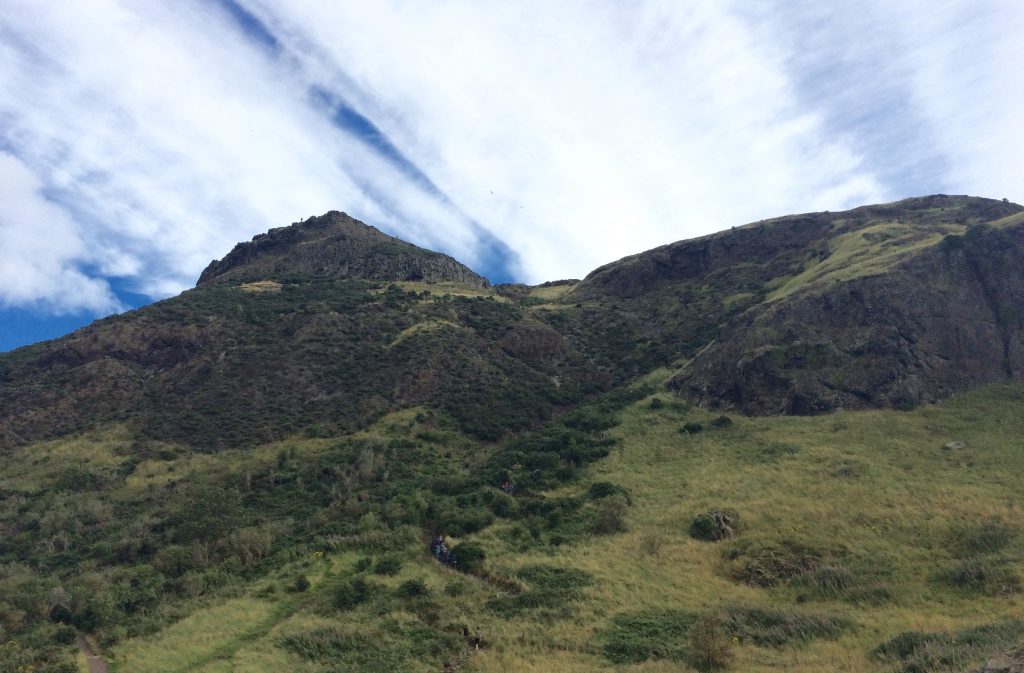 A hill for magnitude, a mountain in virtue of its bold design.

Last weekend, I went climbing. No, not a mountain. A hill.

But not just any hill.

This iconic landmark dominates the skyline of a special city that’s very dear to my heart. For those of you who’ve visited Edinburgh, you’ll know that I’m talking about Arthur’s Seat. Situated in Holyrood Park at the end of the Royal Mile, it’s the highest of Edinburgh’s seven hills at 822 feet, providing a perfect vantage point to take in a panoramic view of the city and the surrounding landscape.

Arthur’s Seat was formed from the remains of an extinct volcano that dates back 350 million years to the Carboniferous Period. Originally, the summit would have been double its current height, but over time this was eroded by glaciation, exposing the rocky crags to the west and a long tail of basalt cliffs, known as Salisbury Crags to the east. The twin summits of the Lion’s Head and the Lion’s Haunch are all that remain of the central vents of the volcano, so named because, from certain angles, the shape of the hill is thought to resemble a crouching lion. Towards the southern end of the Crags are two areas of geological significance: Hutton’s Rock and Hutton’s Section, made famous by James Hutton in 1785, ‘the founder of modern geology’ whose study of how the igneous (dolerite) and sedimentary (sandstone) rock of the Crags were formed, i.e. by different processes at different time periods, revolutionised our understanding of the Earth’s geology.

However, the origin of how Arthur’s Seat came by its name is still a topic of hot debate. Some believe it’s the location of the legendary Camelot. If King Arthur and his army did pass through Edinburgh during one of his twelve battles, there’s no real evidence to suggest that he ever came to visit his seat.

Shame. How cool would it be to find a greatsword thrust into the stone summit rather than a concrete triangulation pillar?

Another theory proposed by William Maitland is that the name is derived from the Gaelic Ard-na-Said, meaning Height of Arrows/Hill of the Archers, which over time evolved from Archer’s seat to Arthur’s seat, and may or may not be connected to the Iron Age fort that once occupied the eastern side of the hill.

Other places names associated with the hill are Dunsapie Loch (Gaelic for hill of wispy grass) and Guttit Haddie, a rock that’s shaped like a gutted haddock. Running beneath Salisbury Crags is Radical Road, named after the 1820 Radical War, and built by unemployed weavers from the west coast of Scotland at the behest of Sir Walter Scott. The road snakes around the base of the Crags and is another popular route to take in the fab view of the city, either by foot or by car.

Some places record a grislier past, such as Hangman’s Crag, which marks the spot where an excise officer was murdered in 1769. The perpetrator, Munro Campbell committed suicide and was buried beneath the Crags, only to be dug up again after the townspeople had a change of heart and hurled his body off the top of the hill.

And just behind Duddingston Loch, is Murder Acre, the site where a bloody riot that took place in 1677 between trade apprentices.

Steeped in ancient legend, a rich and bloody history and place of significant geological discovery, it’s no wonder this ancient giant is a magnet for tourists, hill-walkers, mad joggers – and the occasional hung-over student. To me, however, Arthur’s Seat holds a more personal meaning. One of beginnings and endings and… love.

Not a lot of people know this, (okay, they do now) but it was on this ancient seat that hubby proposed to me. Fast forward 21 years, and it’s also the place where my trilogy will end, in a rather dramatic and heart-wrenching way. Much dying and crying are promised, that’s all I will say. But I’m not ready to think about endings yet. My characters are only halfway into their journey and still have plenty of living and fighting and loving to do before I ruthlessly kill some of them off.

The reason for this particular visit was part family day out, part research for the final scene in my third book. The day started well. The sky was postcard blue and spirits were high until a heated discussion arose as to which route we should take.

So much for marital bliss!

On this occasion, our plan wasn’t to trek to the summit but to hike along Salisbury Crags. Except we couldn’t decide which end to start from. Hubby proposed we should take the rockier route from the Holyrood entrance as the cliffs dip lower here, whereas I was convinced the grassy slope at north tail looked a less precarious way up. I won the argument, but as it turned out – I chose poorly.

Yep, I totally underestimated just how steep and long the escarpment is here. The trail starts opposite the main Holyrood car park, branching off from the main paved path up a long grassy slope, which, at first, wasn’t too demanding, but all too soon rises sharply and continues that way to the top. Trust me, it was painful. After way too many hours of sitting hunched over my laptop, my legs weren’t just grumbling in protest – they were howling.

Three-quarters of the way up, the weather turned and so did my youngest son’s stomach. He struggled bravely on for a while, ashen-faced and sweating until the urge to throw up his breakfast forced him to admit defeat. Hubby kindly took care of him, while I carried on with my eldest son, fighting against the bitter gusts of wind that were pummelling us so hard we were fighting to stay upright. Needless to say, by the time we reached the top my ears were ringing with cold, calf muscles burning and my hair looked like Sigourney Weaver after she was possessed by Zuul in Ghostbusters. Nothing new there then 😉

Fortunately, once the rain-filled gusts passed overhead and the sky brightened, we were treated to an amazing view that stole the last of my breath – this time in a good way. From here, you can see right across the city and the Firth of Forth to the Kingdom of Fife on the north coast opposite, and even as far as the Pentland Hills to the south. You can just pick out the Nelson Monument on top of Calton Hill in the background.

Once No.1 son had taken a few pics and scanned the area for Pokémon, teenage boredom set in, even though we’d only gone a quarter of the way over the top the crags. As the slope was slippery and the cliffs dropped away to nothing in places, I didn’t think it wise to let him make his own way down, so being the protective mum that I am, I reluctantly went with him, muttering unmentionables under my breath. After a quick refreshment stop back at the car park, and a nervous wait for the colour to return to our youngest son’s cheeks, we drove up to Dunsapie Loch.

It was on this very spot that my other half uttered those four life-changing words twenty-one years ago, and it will also be the location for one of the final scenes in the concluding part of The Crystal Keeper…. ssh! Following this sweet but brief trip down memory lane, we parked on Radical Road, where we set off up the path we should have taken in the first place.

Almost there. I wish I could say I hopped sure-footed as a mountain goat over the steep rocky knoll, but sadly it was more of an ungainly scramble, with a few near face plants thrown in. 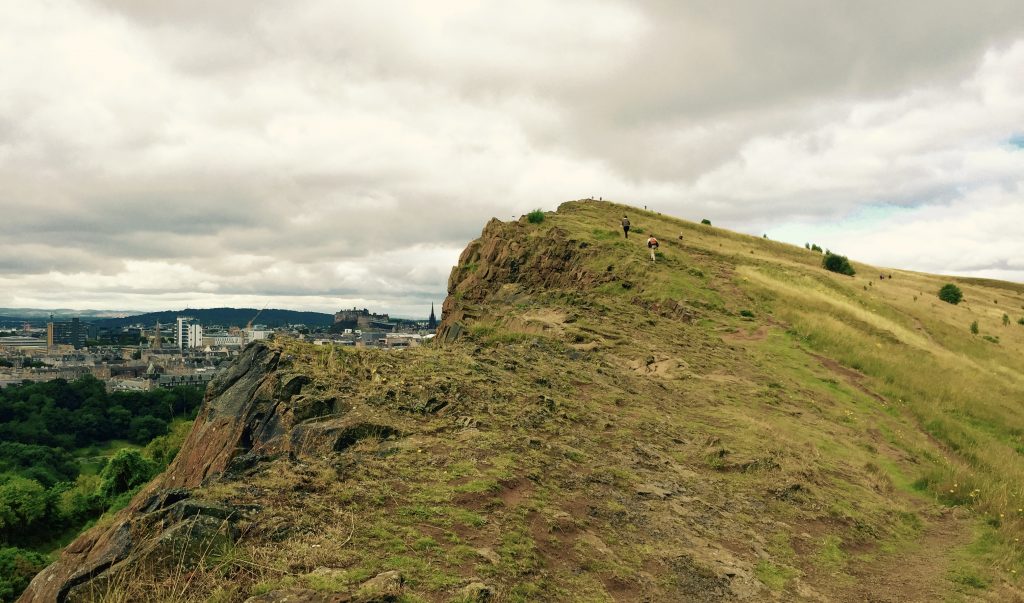 Threading our way around the sharp boulders and crowds of tourists, we finally made it to the highest point of the Crags, Cat Nick. 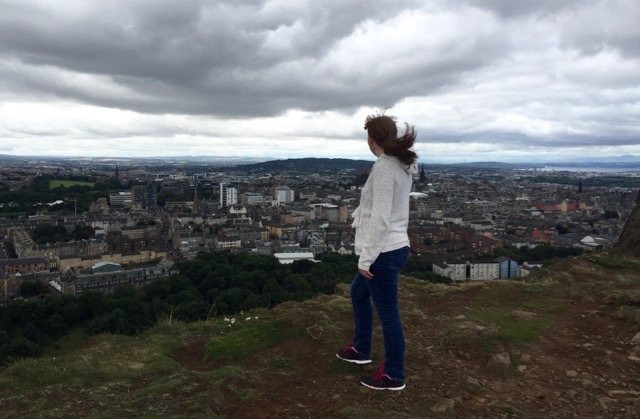 Kept a sensible distance from the edge as the drop is terrifying, but the view is pretty awesome. 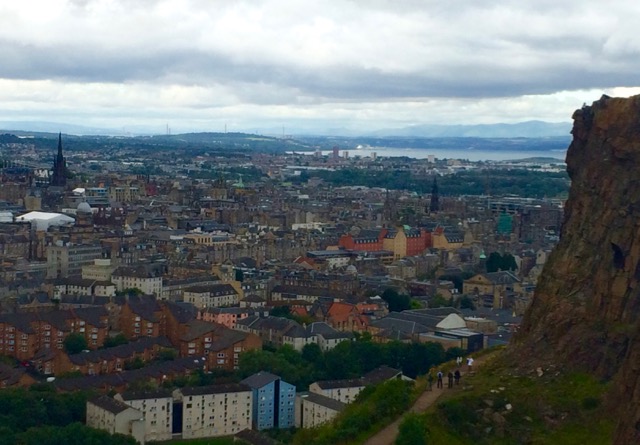 View over the city with the castle in the background sat on top of the other crag. 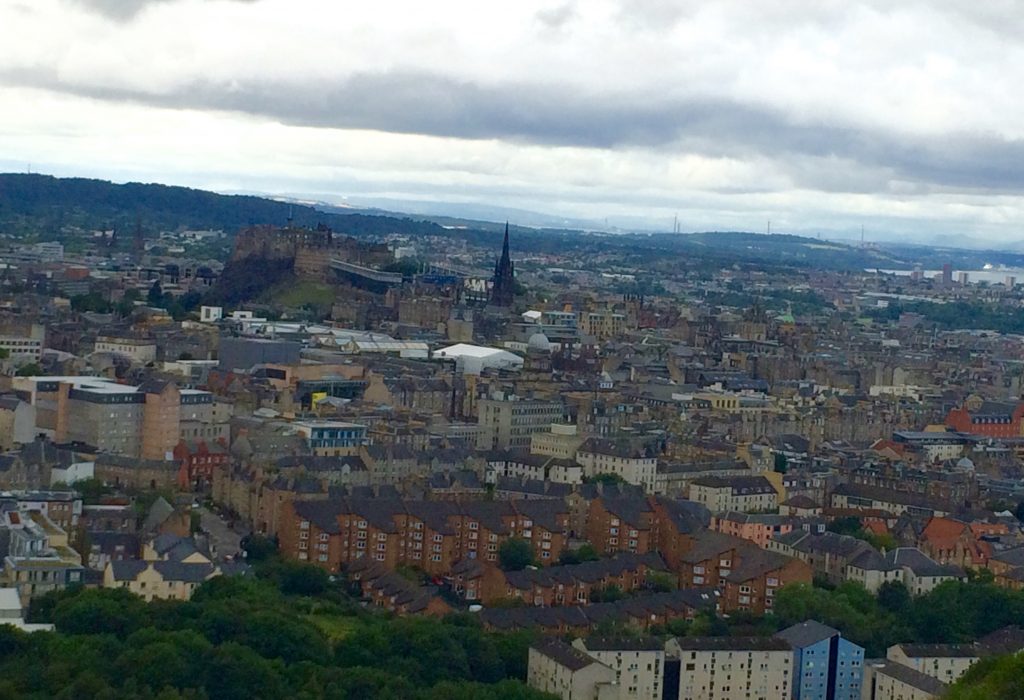 I wouldn’t say it was one of our better family day’s out, but there were some nostalgic highlights that reminded me of something I’ve never been much good at – being present in the moment – rather than rushing onto the next. Because life’s not just about reaching for the big things. It’s also about finding happiness in the small things, pausing once and while to count your blessings and cherishing the here and now. 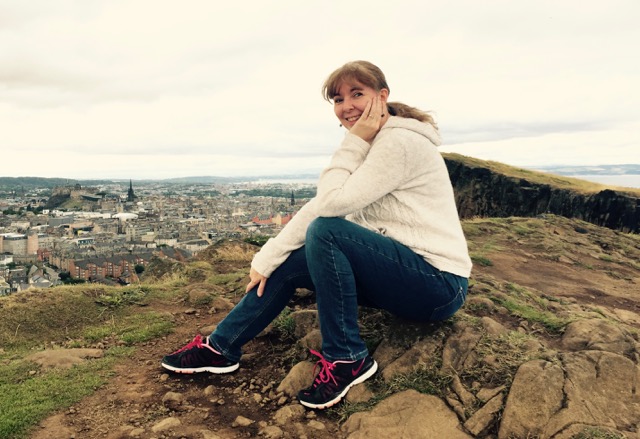 Standing on the brink of the cliffs, feeling the wind on my face and the volcanic rock beneath my feet as I gazed down at my favourite city was definitely an uplifting moment to be treasured. Not that there was much opportunity for quiet reflection amid the horde of sightseers and a trumpet blasting in my ears, (don’t ask) but it was just the boost I needed to keep me on track with my writing. I might have chosen a long and windier path to reach the summit, but I know I’m heading in the right direction – one step at a time.

Though for future research trips, I might leave the kids at home. Oh, and remember to take a hat!