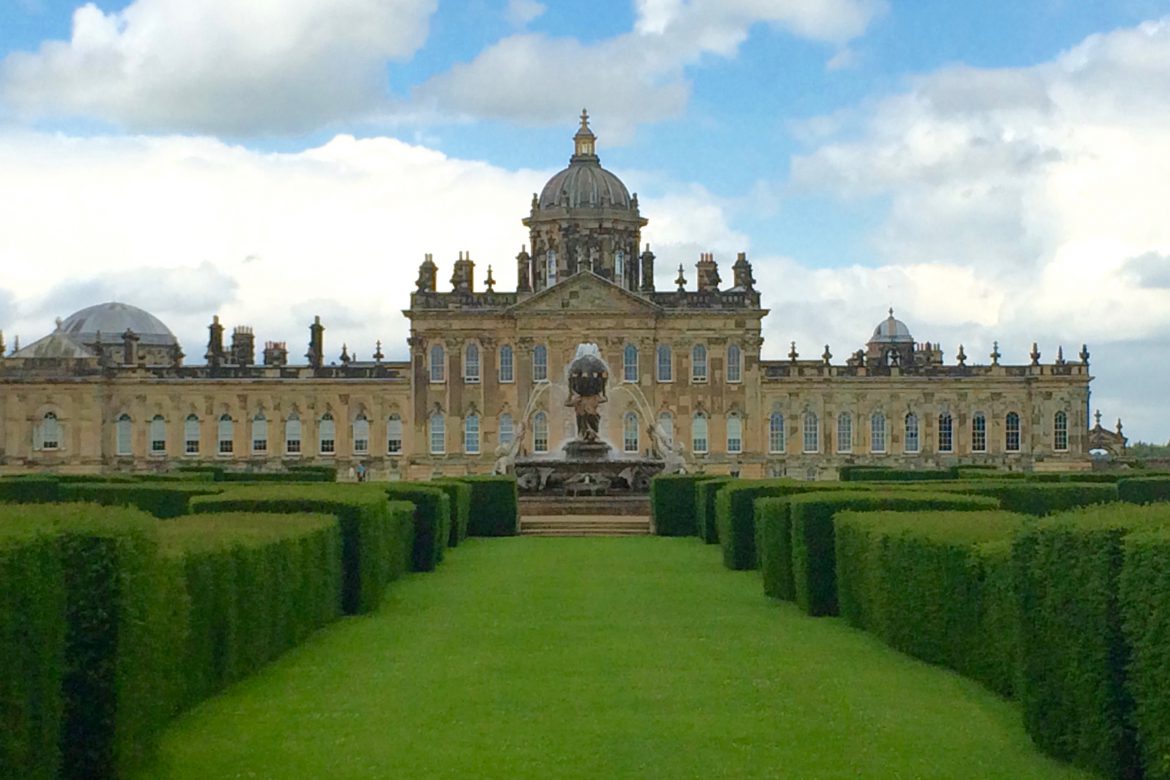 A Grand Old Week in Yorkshire

Back home from our family holiday in North Yorkshire. A grand time was had by all, although my feet might need another week to recover from the amount of sightseeing we packed in. Ashamed to admit that I was breaking out in a cold sweat at the thought of taking time away from my writing and disconnecting myself from social media, but a change of scenery and some brisk sea air was just what I needed to blow away the cobwebs and indulge in some of my favourite pastimes: castles, chilling with a good book and yes, cake! If you’ve never been to this gorgeous corner of the world, here’s a great big slice of Yorkshire pie to whet your appetite. Enjoy!

Our wee abode for the week. Lovely inside and out, although my 6ft 5″ hubby didn’t find the low doors and ceiling quite so charming. Suffered a few bangs to the old noggin during our stay. Not a problem for me though, being all of 5ft 2″. *Engage smug mode*. The garden bench, where I took this pic from, was my favourite reading spot on the few moments the sun did come out. 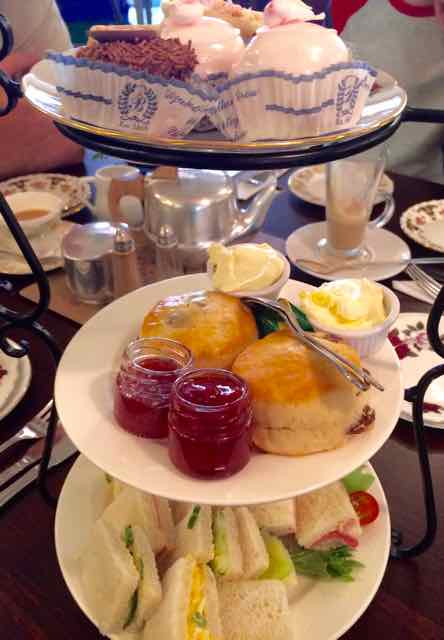 A good example of a Norman motte-and-bailey castle. Originally, it would have been constructed from timber. The two vanishing figures are all you’ll get to see of my boys I’m afraid. They’ve threatened to upload embarrassing footage of me to YouTube if I dare post even a hair of their teenage heads on my blog.

Not so much a castle as a stately home. Design and construction of the house began in 1699 by the 3rd Earl of Carlisle but took over 100 years to complete. It’s been home to the Carlise branch of the Howard family for over 300 years and undergone plenty of changes in its time. The house was famously featured in the 1981 TV series and 2008 film adaption of the Evelyn Waugh novel, Brideshead Revisited. 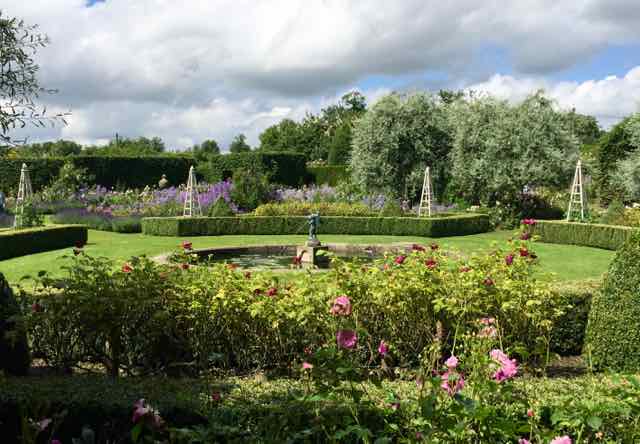 The 1000 acres of landscaped gardens include a woodland walk, lake, Temple of the Four Winds (storing that brilliant name away for future books) and my favourite part, the walled garden. Could have happily got lost in here for hours or even days given the chance to sneak off. 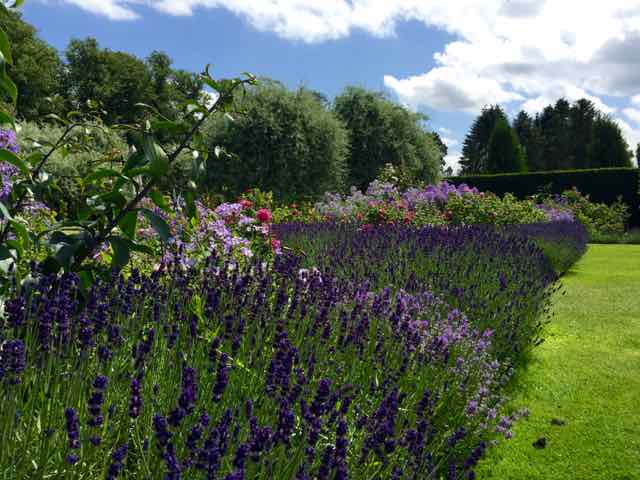 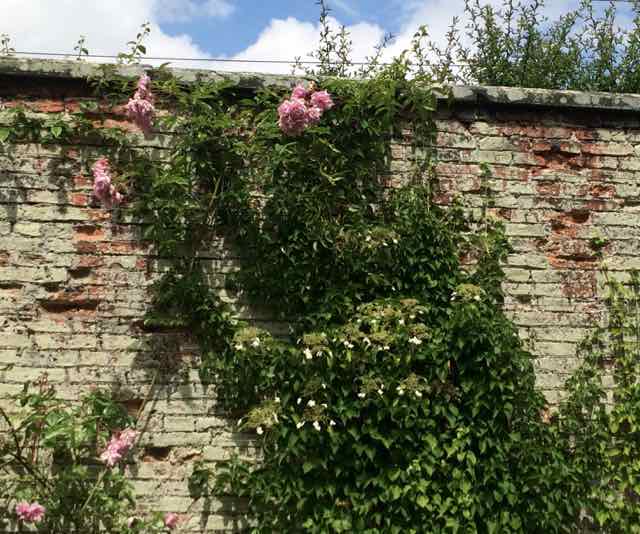 The corridor runs from the east to the west wing of the house, lined with busts, urns and marble-topped tables in the Baroque style.

The painted frescos, originally created by Antonio Pellegrini, were lovingly restored after the dome, along with many other rooms in the house were destroyed by a fire in 1940. 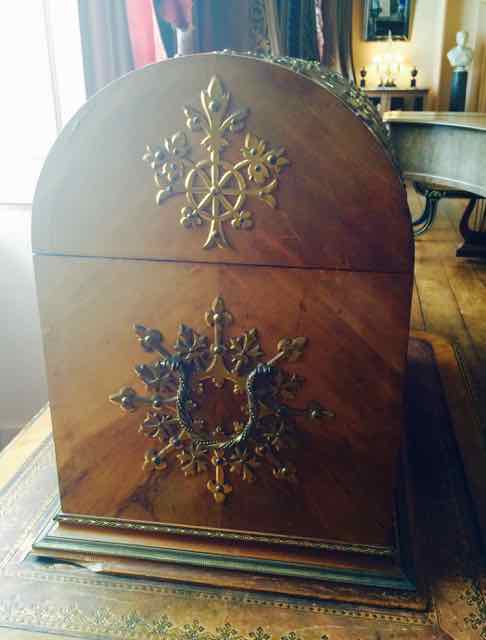 I have a thing for boxes and chests. There was something about the metal work detailing on this one that caught my eye. 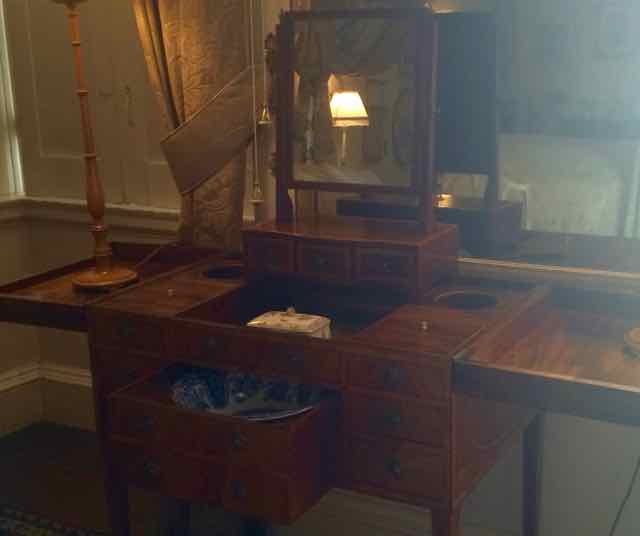 Dating back to the 14th century, the Shambles is one of the oldest streets in York and was once filled with butcher’s shops and a meat market to one end. The overhanging timber-framed houses were deliberately close set to provide shade for the shop fronts beneath. Nowadays, the winding lanes are filled with souvenir, sweet shops and hundreds of tourists. Oh, and a hundred different kinds of fudge, which would have been a hanging offence to pass by empty-handed.

A motte-and-bailey Norman Castle, named after Robert Clifford who met with a grisly death when he was hung from the tower walls by Edward II. The mound was originally constructed from timber in 1068 by William the Conqueror. Twice burnt down, it was later rebuilt in stone to defend against Scottish attack. It didn’t stop Clan Lennox, although our family crest does share a similar motto: ‘I’ll defend!’ 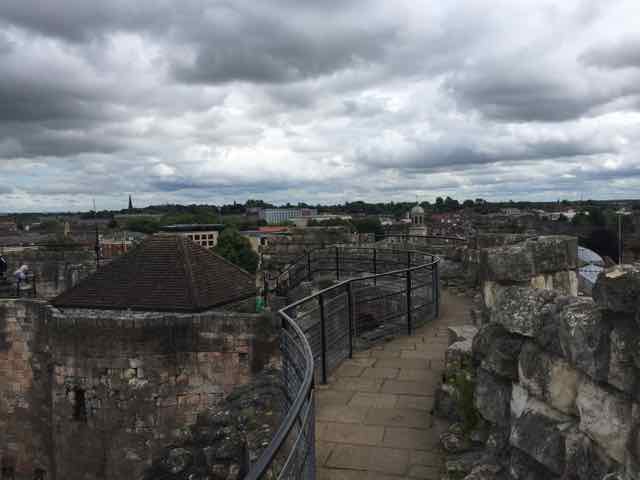 Once I’d climbed the tight spiral steps, I found hubby grim-faced and sweaty-browed at the top. He lasted only a couple of minutes before making a sharp exit back down the stairs. *Shakes head*. He’d never be able to guard the wall at Castle Black if he can’t cope with this mere drop. But if you’re not put off by the height, there’s a fantastic panoramic view of York looking out over the parapet walls. No wonder it was such a good location for a stronghold. You can see the enemy coming for miles! 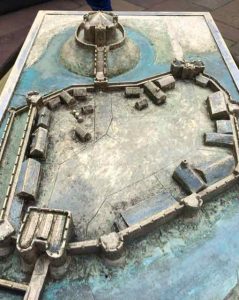 Model showing what York Castle would have looked like in its time. Clifford Tower (the keep) is the last remaining part. 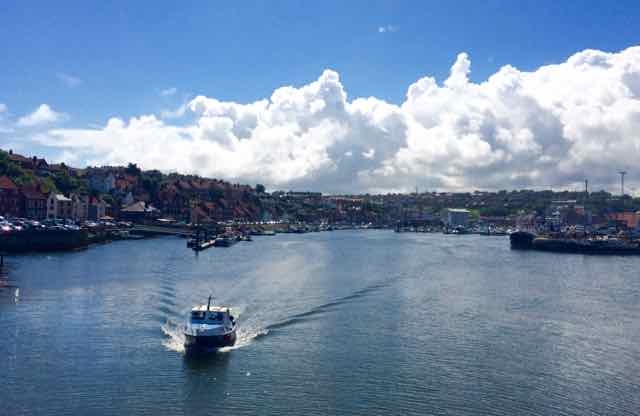 Sun finally decides to put in an appearance on the last day of our holiday during a trip to beautiful Whitby. It was here that Bram Stoker found inspiration for many of the scenes in his novel, Dracula. 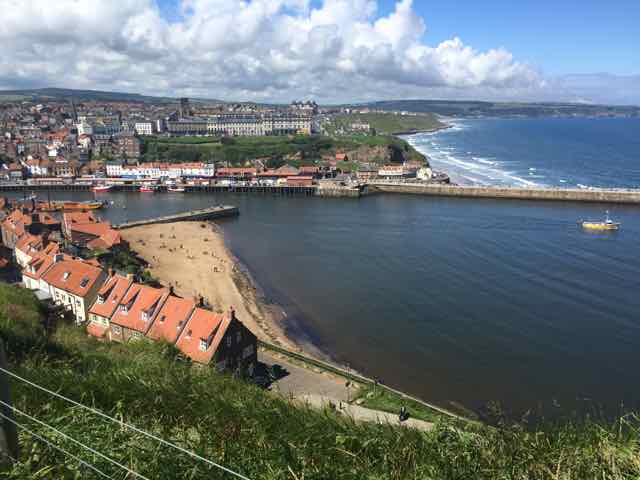 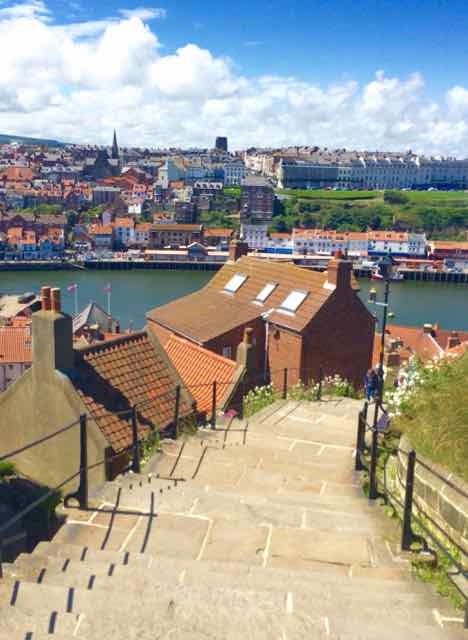 199 steps up to the Abbey. I was fit to collapse by the time I reached the top, but hey, at least I managed to exceed my daily step count for once 🙂 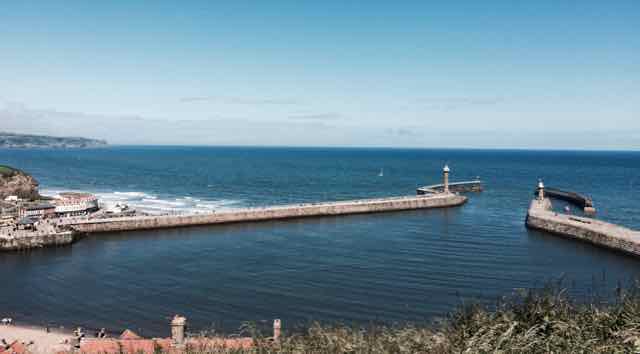 Great view of the harbour from up here. After a bit of sunbathing & some finger-licking fish and chips on the beach, we did eventually summon the energy to walk to the end of the pier.

Nestled high on the cliffs overlooking the town, this Benedictine abbey dates back to 657 AD. It was founded by the Anglo-Saxon King of Northumbria and later destroyed by Henry VIII during the Dissolution of the Monasteries. 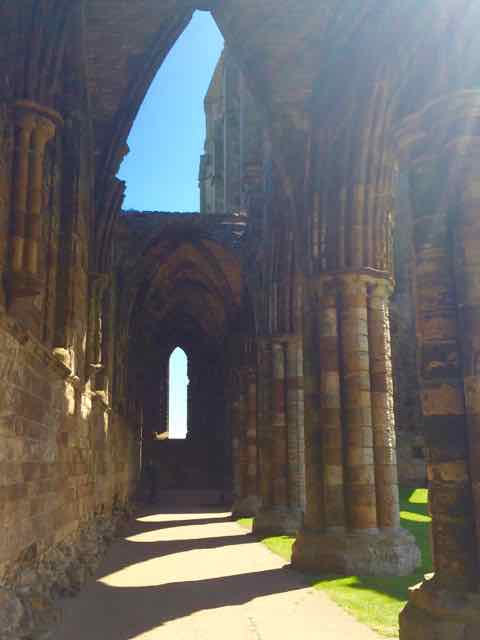 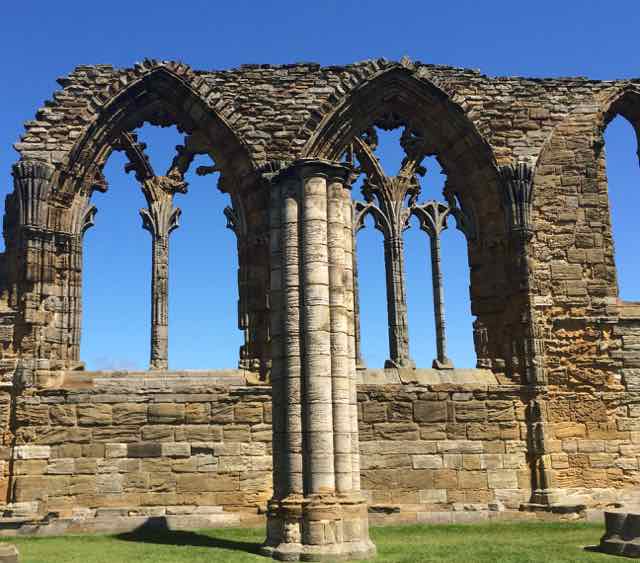 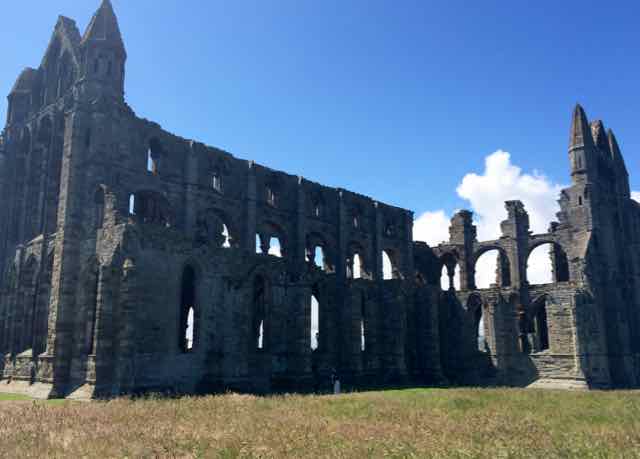 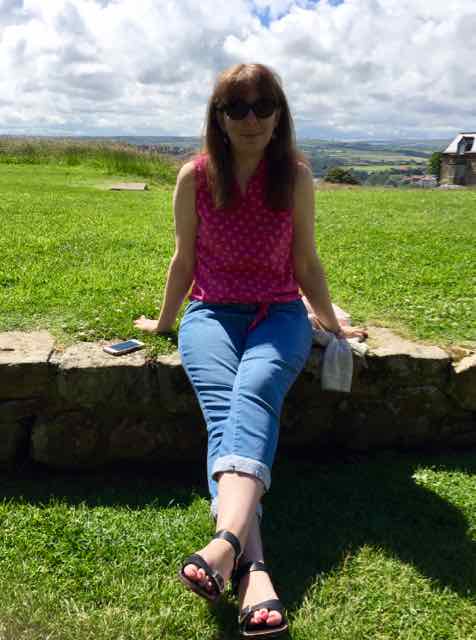 Getting some rays while my boys searched for Pokemon amongst the ruins. Regretted it later as I stupidly forgot to put sunscreen on my feet. Still feeling the burn! 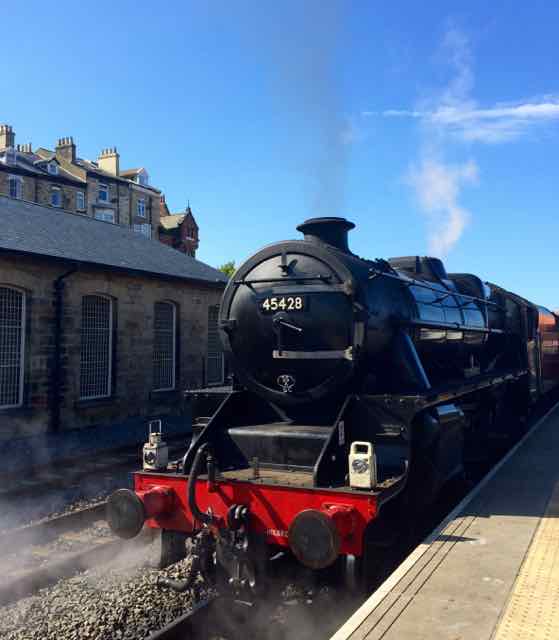 Our transport back to Pickering via the North Moors. Travelled first class for the first time in my life 😀  Have never been so glad of a comfy seat after all that walking, especially as it turned out we were delayed by an hour by a broken down train on the line. 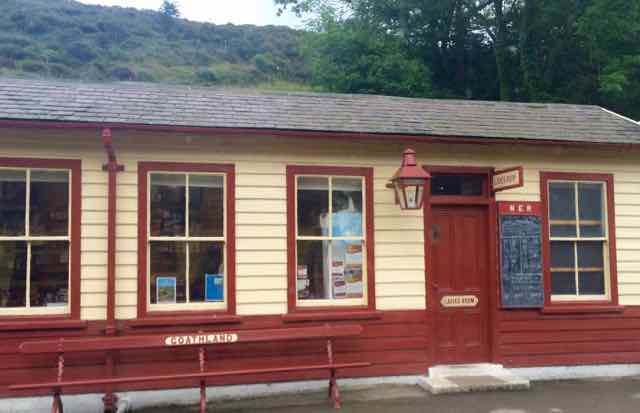 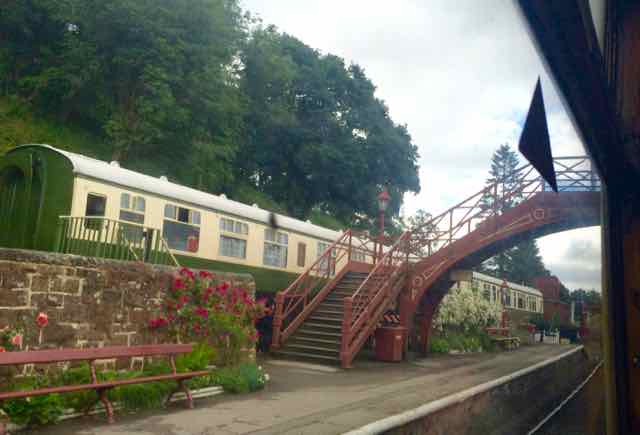 Passed by Goathland station, also known as the location of Hogsmeade in Harry Potter. It would’ve been the perfect end to a perfect holiday if I could’ve stopped off for a butterbeer at The Three Broomsticks. Though my sons would probably have preferred some Pepper Imps from Honeydukes. Oh well, they’ll just have to settle for some good old fashioned fudge instead. That’s if it doesn’t mysteriously vanish while I’m unpacking the suitcases.

Okay, time for me to get back t’mill. Keep your fingers crossed I can squeeze in some writing in between keeping the kids entertained for the rest of the six weeks school hols.

Happy Holidays, wherever they may take you. 😎  xox